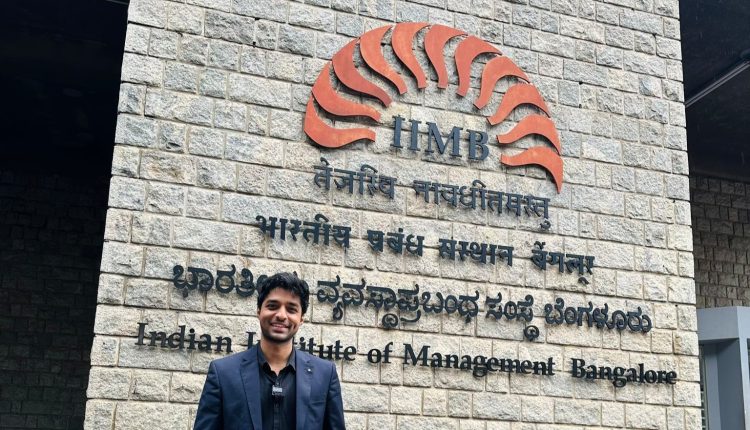 Bengaluru: Sharan Hegde, a finance influencer with 2 million followers on Instagram alone opened up about his incredible story on social media. In his post, he shared that 3 years ago, he gave up his dream of getting into the Indian Institute of Management-Bangalore, despite scoring 98 percentile in the Common Admission Test (CAT).

Hegde decided to pursue his degree in the United States after failing to secure admission at the reputed institute. He got into Columbia University but later dropped out to make his career in content creation.

After getting success in the field of content creation, Hegde was able to get into his dream college but not as a student but as a guest lecturer.

Hegde posted a picture of himself that shows him at the IIM-Bangalore campus and wrote, “98% in CAT. No entry, better luck next time you GEM (general engineer male).” He added, “3.3 Mn followers. Guest speaker to 100+ women entrepreneurs at IIMB.”

He talked about his journey and why he had to give up on his IIM dream. He wrote, “3 years ago, I gave up on IIM, and now I am at IIM. As I stood on the stage with the mic in my sweaty palms, I had a big smile on my face. Why? Because until a year back, I thought my preparation for CAT was a waste of time. It was a tough journey, Juggling an internship and studies, Weekly mock exams, All while living on an INR 5,000 stipend in Indiranagar, Bangalore. Finally, the results were out. I had scored a 98 % and yet not qualified.”

He added, “My misplaced ego was such that either IIM A, B, C or nothing. I now realise that was stupid- since later on a huge part of my professional journey was shaped by incredible colleagues from other IIMs. I then shifted my focus to US MBA colleges. I eventually got into Columbia but guess what? I dropped out of that as well and eventually ended up giving a goddamn talk at the place where I wanted to go in the first place- IIMB. I smile because life has come full circle. The moral of the story is- Whatever happens, happens for good. You just need to know how to see it from a different perspective and make the best out of it. It’s your turn now. Let your hard work shine.”