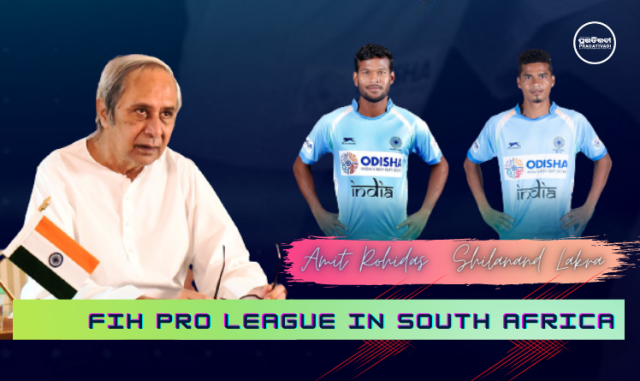 Chief Minister Naveen Patnaik, the silent custodian of Indian Hockey, has congratulated the two Odisha players, Amit Rohidas and Shilanand Lakra on being selected in Men’s Team and wished the entire team all the very best for the upcoming FIH Pro League in South Africa.

Congratulate #Odisha players, Amit Rohidas and Shilanand Lakra on being selected in the 20-member Indian Men’s Hockey Team for the upcoming @FIH_Hockey Pro League matches to be played in South Africa. Wish the team all the very best. #OdishaForSports https://t.co/2NINqjAoiu

The Odisha chief minister patronised hockey at a time the game needed it the most. Patnaik had been a goalkeeper for his Doon School hockey team and it is that early love which led to his support for the game, as Odisha sponsor the teams right from the junior to the senior levels, both men and women.

Hockey India on Thursday named the 20-member Indian Men’s Hockey Team who will represent the country in the upcoming FIH Pro League matches in South Africa against South Africa and France which will be played in Potchefstroom South Africa from 8th February to 13th February.

The Indian team will be led by Manpreet Singh and Vice Captained by Harmanpreet Singh in the season opener. The team will see two new faces in promising young drag-flicker Jugraj Singh and speedy forward Abhishek.

Notably, Odisha – the Eastern State of India – is known for its love for Hockey and over the years it has evolved to be the Global Hub of Hockey. The State successfully hosted the Odisha Hockey Men’s World Cup Bhubaneswar 2018, followed by the FIH Men’s Series Finals Bhubaneswar Odisha, FIH Olympic Qualifiers Odisha, and FIH Hockey Pro League 2020-21. Odisha has previously hosted the Champions Trophy 2014 and the Odisha Men’s Hockey World League Final Bhubaneswar 2017. Odisha also hosted the FIH Men’s Hockey Junior World Cup in 2021.