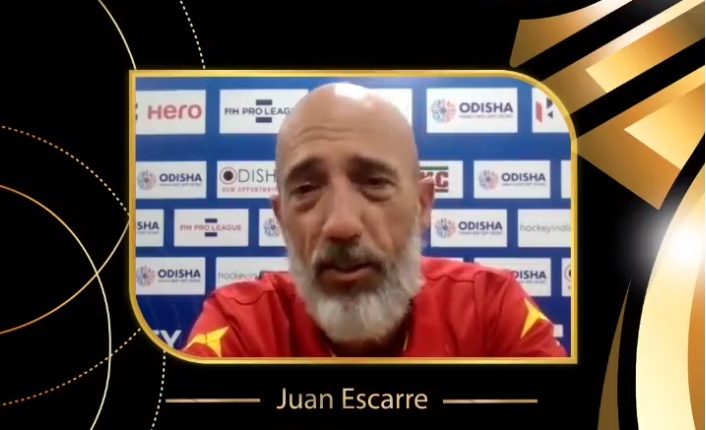 New Delhi: As the clock ticks closer to the FIH Odisha Hockey Men’s Hockey World Cup Bhubaneswar-Rourkela 2023, with less than 100 days to go, Hockey India launches Favourite World Cup Memory which will bring hockey fans unknown facts, fun anecdotes and special moments for hockey stars around the world who have achieved the pinnacle at this prestigious event in the previous years.

Our series picks up with Spanish hockey stalwart Juan Escarre, who went back in time to reflect on his Silver medal-winning feat at the 1998 World Cup and Spain’s exciting rivalry with the Netherlands during his time.

The Spanish team, led by Joaquim Malgosa, remained unbeaten in the group stage, finishing second in Pool B of the 1998 Men’s Hockey World Cup with four wins and a draw. They went on to defeat Germany 3-0 in the Semi-Finals before succumbing to a narrow 2-3 loss to the hosts Netherlands to earn a silver medal.

“I got injured in the Final. I remember, we scored the first two goals, I got injured and then we lost. Every time I go to the Netherlands, they thank me and say because of my injury they won the world cup,” Juan Escarre, who scored three goals in the tournament, said.

Speaking about his memories of the 1998 World Cup, the former midfielder, who is now working as an Assistant Coach with the Spain national team, recalled playing in the final against a strong Dutch team in front of 30,000 fans.

“There were around 30,000 people watching us play in the Final against the host country (Netherlands). I remember perfectly the moment of the National Anthem. The entire stadium was covered in Orange colour and there were only some red shirts in the corner.”

“But, it’s 11 against 11. There is nothing else. When you play in international tournaments, you know this feeling, and you have to do the same work whether the crowd is against you or supporting you,” he added.

At the 1996 Olympic Games also, Spain lost to the Netherlands in the Final to settle for second place. Speaking about Spain’s rivalry with the Netherlands, the Spaniard stated, “They are one of the best teams I ever played against. I still remember all the names. We lost on almost all the occasions we have played against them. Just before the World Cup, we played some friendly matches and we lost 6-1, 6-0 to them. We had chances in the Final at the Atlanta Olympics, we started scoring, in the world cup we also had our chances, but it was too much for us.”

Regarded as one of the best midfielders of his time, Escarre had a long and storied career for Spain, racking up as many as 256 appearances. He featured in the Sydney 2000 Olympics and led the team to a fourth-placed finish at the Athens 2004 Olympics. Under his Captaincy, Spain won the 2004 Champions Trophy held in Lahore, Pakistan. He was also part of the team that won the EuroHockey Championships in 2005.

When asked about his illustrative career, he said, “I started playing with the senior team at my club in Alicante when I was 13. When you are playing with a senior team, you need to learn to pass the ball as fast as possible. I feel like I was lucky that in my career I had to learn everything, and all these things helped me become a versatile player. Forward or midfield, both are the same for me.”

He added, “But, now it has changed, players are more specialists. It is very difficult to find a midfielder playing forward or a forward playing in midfield.”

Escarre, who recently toured Bhubaneswar with Spain Men’s Team for the FIH Hockey Pro League 2022/23 matches against India and New Zealand, said that “anything is possible at the World Cup.”

“If you see the world rankings- Belgium, Australia and you will always find a very good German team. Of course, India also, I think they have a chance. And, the Netherlands and Spain as well. But, you never know, anything is possible in this kind of tournament,” he said.

Escarre further opened up on Spain’s chances of making it to the knockout round of the tournament.

“We will have the first match with India, and then Wales and England. Then, you have to cross with another group, and with two good matches, you are in the semi-Final. During my time, the system was very difficult, you have to be on the top of six teams and straight to Semi-Final or from there play 5-8 placing. We will see, we are working to give our best and we will try to win it,” the Assistant Coach concluded.

Joe Biden’s Granddaughter Naomi To Get Married In November