Bhubaneswar: The much-awaited FIH Odisha Hockey Men’s Junior World Cup 2021 has been confirmed to be held as per schedule in Odisha capital, Bhubaneswar.

“In continuation of previous letter issued vide letter of even number dated 21. October 2021 and as per request communicated by Department of Sports, Ministry of Youth Affairs and Sports vide email dated 1, October 2021, as England has been replaced by Poland, the international participants from Poland arc also exempted_ from mandatory home quarantine requirements to participate in the FIG Junior Men Hockey World Cup,” a letter issued by Heath MInistry said. 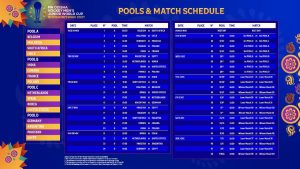 “Conditions as already communicated to the Department of Sports, Ministry of Youth Affairs and Sports vide above-mentioned letter shall remain the same. This issues with the approval of the competent authority,” the letter read.