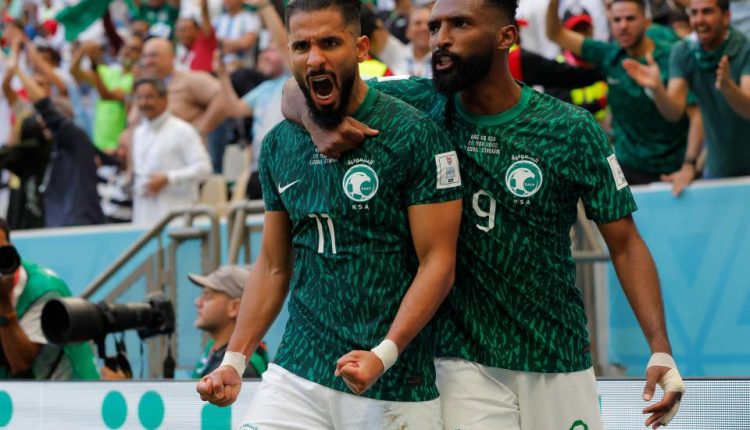 Saudi Arabia registered their biggest ever victory in FIFA World Cup history as they outclassed Argentina 2-1 in a Group C match at the Lusail Stadium in Qatar on Tuesday.

This was Saudi Arabia’s only third victory in World Cup finals.

Argentina were on course to equal Italy’s record unbeaten run of 37 games after the mercurial Messi opened his fifth and final World Cup with a 10th-minute penalty. Messi scored the penalty against Saudi Arabia after a video review spotted a foul before Argentina had three goals disallowed. Messi, 35, beat Saudi goalkeeper Mohammed Al-Owais on a breakaway, but that goal, as well as two others by his teammate Lautaro Martinez, were ruled offside.

But La Albiceleste were stunned in the second half when Saudi Arabia scored two goals in five minutes to take a 2-1 lead in Qatar. Saleh Al-Shehri leveled for Herve Renard’s side minutes after halftime with a low shot before Salem Al-Dawsari curled in a brilliant strike from the edge of the penalty area to give Saudi Arabia the lead.

Messi’s quest to win the one major title to elude him got off to a shocking start and brought back memories of Cameroon’s 1-0 win over an Argentina team led by Diego Maradona in the opening game of the 1990 World Cup.

This also rivals shocking results such as Senegal beating then-titleholder France 1-0 in the 2002 tournament opener and the United States stunning England by the same score in 1950.

Goals by Saleh Alshehri and Salem Aldawsari in a five-minute span in the second half gave the Saudis their greatest win.

Govt, Private Employees To Get Paid Leave On By-Poll Date

Pragativadi News Service 31 mins ago
photo of the day