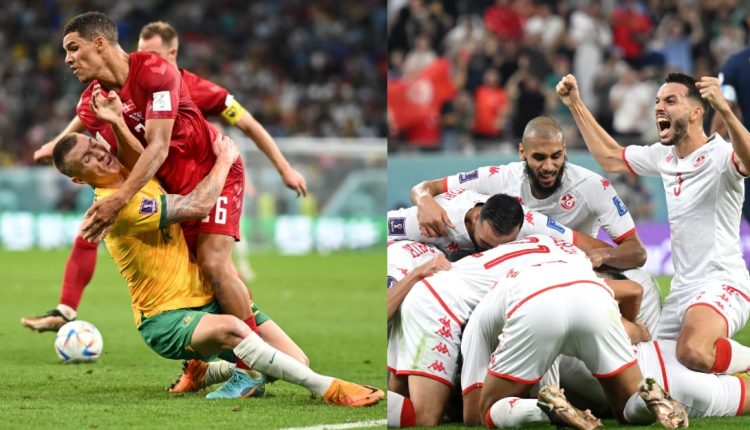 Australia reached the last 16 of the World Cup for only the second time in their history with a 1-0 win over a disappointing Denmark on Wednesday.

Winger Mathew Leckie scored the winner on the hour with a smart run and finish to end Denmark’s Qatar hopes at the group stage.

Australia, who made the knockout rounds in 2006 when they had Harry Kewell, Tim Cahill and Mark Viduka in their ranks, have now won back-to-back World Cup games for the first time.

They progressed to the knockouts in second place behind holders France in Group D and will play the winners of Group C. Poland are top of that group going into the final round of matches.

Tunisia on Wednesday stunned the current World Champions, France, in a key World Cup match but failed to progress to the round of 16. This was because Denmark suffered a shock defeat against Australia, who secured a place in the knockout stage.

For Tunisia to progress to the next stage, Denmark needed to defeat Australia. France had already secured a place after winning the first two matches of Group D. Australia too finished with the same points, while Tunisia had to contend with four points.

Tunisia were the dominant side all through the match. They were rewarded for their spirited performance as skipper Wahbi Khazri gave them the lead in the 58th minute of the match. Tunisian fans were stunned after France scored an equaliser in the dying seconds of the match, but the goal by Antoine Griezmann was rejected following a VAR check.

Though Tunisian fans and players celebrated their splendid victory, their dream to qualify to the round of 16 for the first time remained unfulfilled.

France are set to face the runner-up of Group C, currently Argentina, in the knockout stage on 4 December.

Elsewhere, Australia took the lead with a goal by Mathew Leckie in the 60th minute of the match against Denmark, who finished at the bottom of their group with just one point in three matches.