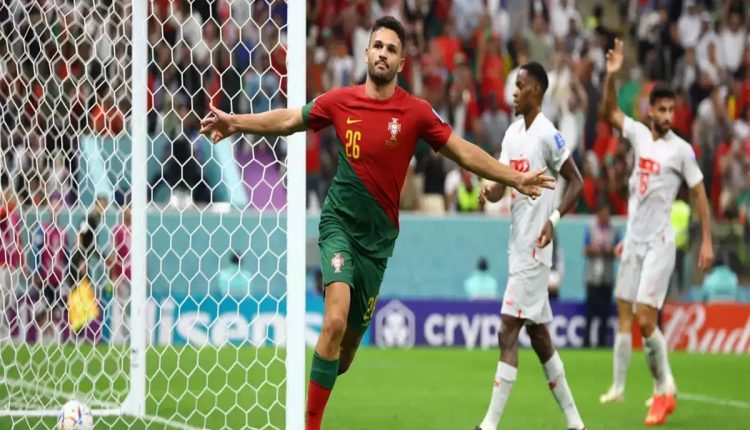 Qatar: Goncalo Ramos scored a stunning hat-trick as a slick Portugal thrashed Switzerland 6-1 on Tuesday to storm into the quarter-finals of the World Cup for the first time since 2006. Portugal coach Fernando Santos took the brave call to bench Cristiano Ronaldo and was rewarded with an artful display from his side as they set up a last-eight clash with Morocco, who stunned Spain in a penalty shootout earlier on Tuesday.

Ramos, a 21-year-old forward who only made his Portugal debut last month, demonstrated the kind of clinical finishing for which Ronaldo was once known in scoring the first goal in the 17th minute and adding others in the 51st and 67th.

No player had scored a hat trick in his first World Cup start since Germany striker Miroslav Klose in 2002. “Not even in my wildest dreams did I think about being part of the starting team for the knockout stage,” said Ramos, an unheralded striker who plays for Benfica and counts Ronaldo as his soccer idol along with Robert Lewandowski and Zlatan Ibrahimovic.

Ramos scored the opening goal in the 17th minute and added others in the 51st and 67th — by which time chants of “RONALDO! RONALDO!” were swirling around the 89,000-seat Lusail Stadium. Ronaldo entered as a substitute in the 72nd minute to loud cheers, though Portugal had the game wrapped up by then with defenders Pepe and Raphael Guerreiro also scoring. Rafael Leao added a late goal in stoppage time.

Manuel Akanji scored for Switzerland. Portugal advanced to the quarterfinals for the third time, after 1966 and 2006, and will play Morocco on Saturday.