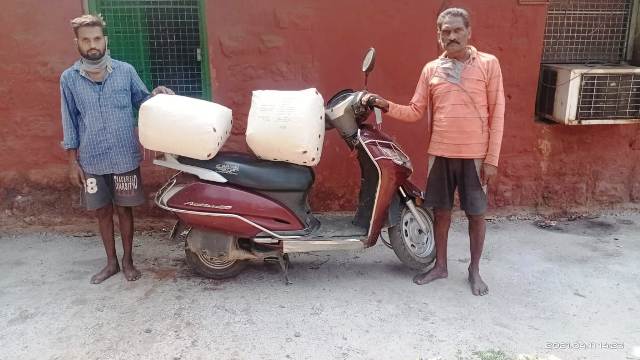 Jharsuguda: Police have arrested a father-son duo after they were caught red-handed while smuggling ganja on a motorcycle during motor vehicle checking.

The arrested accused are identified as Bhagaban Patel (58) and his son  Shantanu Patel (31) of Purunabasti in Agjariapada, informed Jharsuguda PS IIC Sabitri Bal.

According to reports, the duo was intercepted by police personnel during MV checking at Pahadi Mandir Chowk last evening. The cops noticed two suspicious sealed gunny bags the duo was travelling with.

During checking a total of 24 kg 450 gms of ganja was found sealed in the two bags following which both were taken into custody immediately.

Jharsuguda Town Police have registered a case No. 196/21 U/S 20(b)(ii)(C) NDPS Act. The arrested father-son duo has been forwarded to the court, sources added.