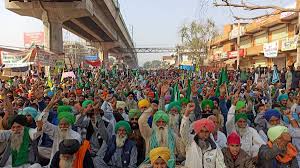 New Delhi: Farmers on Wednesday rejected government’s proposal over the farm laws and announced for a nationwide sit-in protest on December 14.

A representative group of farmer unions on Wednesday received a draft proposal from the government on some key concerns raised by the protesters.

As farmers agitation against the Centre’s three contentious farm laws entered day 14, the Centre today proposed to give a “written assurance” that the existing Minimum Support Price (MSP) regime for procurement will continue. In a draft proposal sent to 13 agitating farmer unions, the Centre also assured registration of all private mandis to strengthen AMPC.

The Centre’s proposals came after a four-hour meeting between 13 farm unions and the Government side led by Home Minister Amit Shah on Tuesday night.

The All India Kisan Sangharsh Coordination Committee (AIKSCC) released a statement on government’s proposal on Wednesday and termed them “old proposals dressed up as new”.

“Modi govt insincere & arrogant about resolving farmers demands; all farmers bodies rightly reject old proposals dressed up as new. AIKSCC and all farmer organisations reiterate their demand to repeal 3 farm acts and EB 2020. Protest to continue, more farmers to join in, in Delhi. District level dharnas to start in all states [sic], ” the release stated.

The release further mentioned that the National Working Group of AIKCC met on Wednesday morning and took some decisions. “AIKSCC joins farmers organisations in denouncing & rejecting the so-called insincere and arrogant so-called ‘new’ proposal of Central govt [sic],” it said.