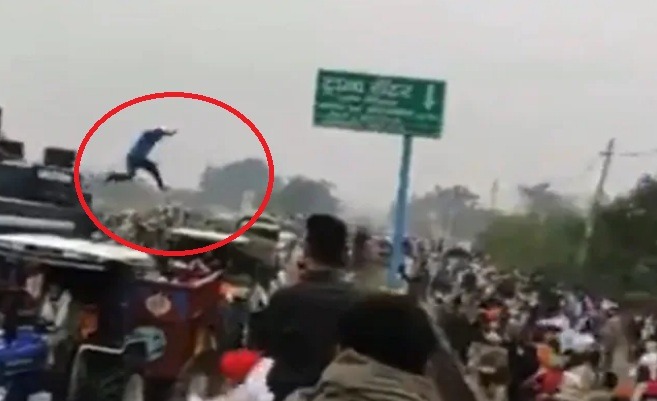 Farmers’ Protest: Agitator Who Turned Off Water Cannon Charged With Attempt to Murder

New Delhi: Navdeep Singh, a 26-year-old man from Haryana’s Ambala who was seen climbing onto a police water cannon vehicle to turn it off during the protest march of farmers has been under charges of attempt to murder which carries a maximum penalty of life imprisonment, rioting and violation of Covid-19 guidelines.

In a video doing rounds on social media, Navdeep can be seen scaling up a blue colour water canon, turning it off and then jumped on a tractor-trolley standing nearby. Notably, Singh was lauded on social media for his actions.

Defending himself, Singh, the son of a farmers’ body leader Jai Singh asserted that he was only trying to protect farmers from being hit by water in such chilly weather.

Braving tear gas shells and water cannons they camped at the Delhi borders for several hours, making multiple attempts to break barricades and resorting to stone pelting, but agitating farmers continued with their fight against the new farm laws.