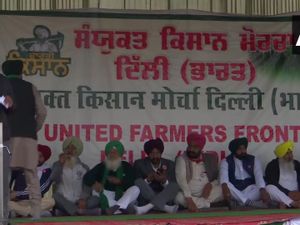 New Delhi: Farmers on Monday began a day-long hunger strike in the national capital even as the deadlock continues over the farm laws.

This is an attempt to wake them up,” says Balkaran Singh Brar, Working President, All India Kisan Sabha, Punjab as farmers sit on a daylong hunger strike at the protest site at Tikri border.

Initially the farmers’ unions had planned an indefinite strike, but later shelved the idea and reduced it to a day. Farmers will also stage dharnas at district headquarters across the country and submit a written memorandum to Prime Minister Narendra Modi.

People have been advised to take alternate routes via Lampur, Safiabad and Singhu school toll tax borders. Traffic has been diverted from Mukarba and GTK road.

Ghazipur border is closed for traffic coming from Ghaziabad to Delhi due to farmers’ protests. Motorists are advised to take an alternate route for coming to Delhi via Anand Vihar, DND, Chilla, Apsara and  Bhopra borders.