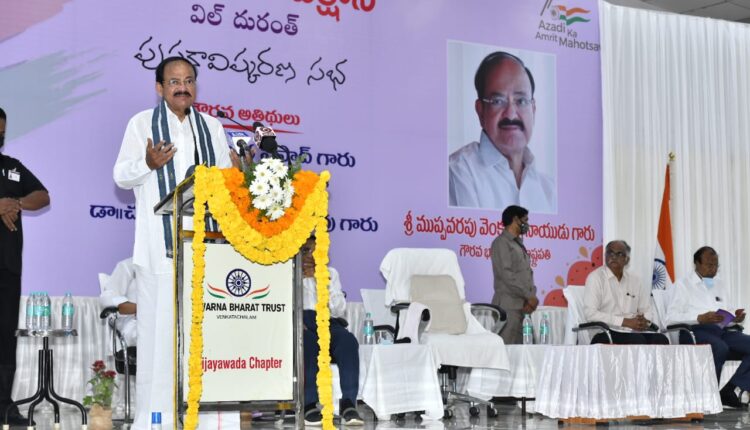 Every Indian Stranded In Ukraine Will Be Brought Back Safely: Vice Prez

New Delhi: The Vice President, M Venkaiah Naidu today expressed confidence that every Indian stranded in Ukraine will be brought back home safely and said that the Government is making every effort in that direction.

Speaking at a book release function of ‘Bharata Desa Pakshana’ – a Telugu translation of ‘The Case for India’ by Will Durant in Vijayawada today, he said that Prime Minister, Shri Narendra Modi and the External Affairs Minister, Shri S. Jaishankar had apprised him of the measures being taken to rescue Indians stranded in the war zone.

Naidu said that India is adopting a calibrated approach on international developments keeping in view the country’s national interests. He urged everyone to speak in one voice to protect the country’s interests and not voice anything that will be detrimental to India.

The Vice President deplored the disinformation and misinformation campaign by sections of international media against Indian democracy as certain powers were unable to digest the progress and emergence of India as a powerful nation.

The Vice President said that India always believed in peaceful coexistence with other countries. He recalled that India was once known as Vishwaguru and was powerful culturally and economically. He said India wants to become strong, stable and prosperous to help others.

The Vice President also criticised the attempts by some forces to divide the country in the name of caste, creed, region and religion.

Speaking about the British rule, Naidu said that ‘Not only did the British loot our wealth, but they also dented our self-respect. By introducing an education system which was faulty and exclusionary, they never highlighted the greatness of India’s achievements. They distorted our history’.

Naidu added that it is important for people to understand how colonial rule has brought divisions in Indian society, destroyed local industries and impacted India’s economy.

Referring to Will Durant’s book as a useful resource to study the British rule, Shri Naidu said the noted American historian uncovered the real nature of British rule in India by showing the ‘deliberate bleeding of India by England for a hundred and fifty years’ and describing it as ‘the greatest crime in all history’. He also noted how Durant’s work recognised India’s ancient civilisation and its contribution to the world’s languages, culture and mathematics.

Commending the translator Smt. Nadella Anuradha and the publisher Shri Ashok for their efforts, Shri Naidu stressed the need for bringing out more translations of historical works into Indian languages.

Later, Naidu released a CD containing the famous “Jagannathashtakam” or an octave on Lord Jagannath and Jagannath Philosophy. Noting that ‘Jagannath Culture’ is a ‘synthesis of all the culture trends and religious ideologies of our country’, the Vice President said Jagannath Culture does not differentiate devotees on the basis of caste, creed or religion and that is the reason for its popularity across the world. ‘In the present situation when there is increasing materialism and social tensions across the globe, promoting spirituality is the need of the hour’, Naidu observed.