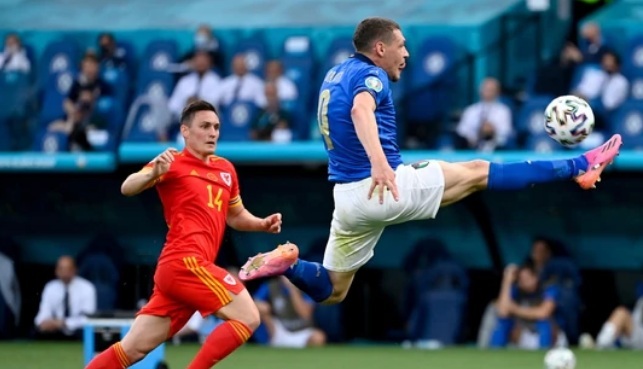 Rome: Italy advanced into the last 16 of their Euro 2020 group on Sunday as they defeated Wales 1-0 here on Sunday.

The Italians had already guaranteed their progress from Group A, but they assured themselves of first place with victory, while Wales secured a berth too by finishing ahead of Switzerland on goal difference.

Italy are now unbeaten in 30 games, equalling their all-time best run recorded from 1935 to 1939, and kept a clean sheet for an 11th consecutive match to underline their credentials as potential tournament winners.

Pessina volleyed the dominant hosts in front at a lively Stadio Olimpico after 39 minutes as they put in an impressive display despite coach Roberto Mancini making eight changes to his starting line-up. Wales’ task was made harder when defender Ethan Ampadu was sent off in the 56th minute for a stamp on Federico Bernardeschi’s ankle minutes after the Italian winger’s free-kick had struck the post.

Italy’s relentless pressure continued as they pushed for a second, but Gareth Bale squandered a rare chance to earn Wales a draw when he volleyed over unmarked from 12 yards.