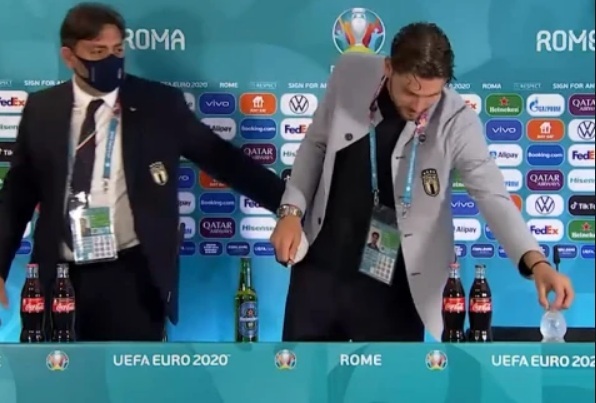 Rome: Italy’s Manuel Locatelli followed the example set by Portugal’s superstar Cristiano Ronaldo by setting aside the Coca-Cola bottles out of the camera’s view before sitting down for the press conference.

Ronaldo had looked horrified when he spotted the fizzy drinks on the table when he spoke to the media earlier this week, placing them out of sight of the cameras and holding up his own bottle of water to the camera instead.

Ronaldo’s actions caused a major stir, with Coca-Cola’s share price falling by $4 billion as the world’s most famous footballer urged his millions of fans to ditch the drink in favour of water. There were similar scenes on Tuesday night when France midfielder Paul Pogba gave his own post-match press conference, though this time Manchester United’s devout Muslim removed a bottle of Heineken beer from the table.

Now Locatelli has become the third player to take on Euro 2020’s sponsors, removing two bottles of Coca-Cola from their place front and centre of the table and putting his own bottle of water directly in front of him instead.

Family Attacked Over Past Enmity In Balasore, 10 Injured