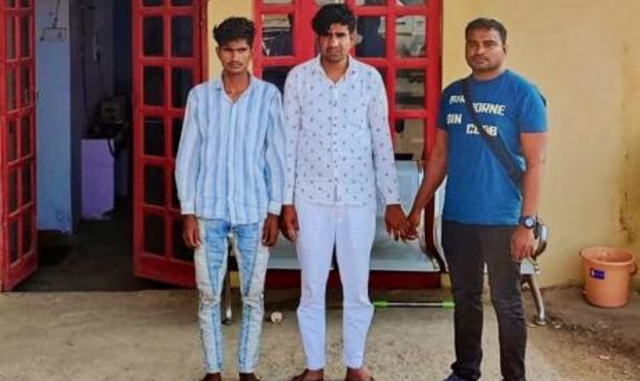 The arrested accused persons were produced before ACJM, Ramgarh, Alwar, and Rajsthan and brought on 05 days transit remand to Bhubaneswar for their production before SDJM, Bhubaneswar. The group, as revealed so far, has opened near about 2000 mule accounts in different parts of the country mainly in Odisha, West Bengal, Bihar and Assam.

Further, EOW also arrested one local accused namely Anil Khiller from Baisinga, Mayurbhanj who used to supply the SIM to the scamsters in Rajasthan. He has procured and sent at least 1200 SIMs to these scamsters.

This case was registered on the allegation of opening mule accounts with the Indian Post Payment Bank (IPPB) in the name of different innocent/rustic persons especially in Nabarangpur by giving the impression that the account holders would get monetary benefits under different Govt. schemes through these accounts but these accounts were used for illegal money transactions (In various Cyber Crimes) beyond the knowledge of the actual account holders.

Investigation revealed that some local youths namely Subir Benya, Upendra Samarth, Rajendra Harijan, Dhansingh Harijan and Sansai Santa (Gramin Dak Sevak) of Nabarangpur in criminal conspiracy with some scamsters of Rajsthan have created hundreds of mule accounts with Indian Post Payment Bank (IPPB) by using the Adhaar, PAN, photographs of the innocent villagers, but these accounts were being latched with different SIM numbers so provided by the fraudsters operating from Rajasthan. As a result, any transaction carried out through these accounts was being intimated to the fraudsters, who were managing the phones with given SIM numbers.

During investigation, these five local accused were earlier arrested in the case. They disclosed that they were opening the mule accounts in the locality for the fraudsters of Rajsthan who were paying them Rs.2,000/- per account. Basing on the clue obtained from the arrested persons and by analysing different incriminating telephone numbers and bank account statements, EOW arrested Mahmud Khan and Munfed Khan from Alwar, Rajasthan. Initial investigation suggests that Mahmud Khan received at least Rs.62 Lakh remitted through the mule accounts fraudulently opened with IPPB, Nabarangpur.

Apart from this (IPPB account) angle, the fraudsters were illegally procuring SIMs from different sources/ states to be used in this scam.

Modus Operandi of the Scamsters

10 to 15 groups manages the fake SIM business in Alwar District. After receiving the fake SIMs from Odisha and West Bengal, they sold out the same in Rajasthan and U.P States @ 1000/- per SIM for fraud purposes only (OLX FRAUD, JOB FRAUD, PHISING, NUDE VIDEO CALL FRAUD, NIGERIAN FRAUD, ELECTRIC BILL FRAUD, LOTTERY FRAUD and other frauds in which fraudster contacted the victims and also fraudster opened different wallets for transaction of fraud money.

Scamsters opened Facebook Page with linking of their WhatsApp by paying the advertising money to Facebook (META). The facebook page was pretended to be for the selling/purchasing of old antique coin and notes.

After activation of Facebook Page , when some people posted their mobile phone number in the Facebook comment box for selling of their old coin and old rupee. Accused persons contacted them on their given Cellphone number.

After befriending these persons of Odisha, West Bengal and Assam and other states (especially in interior area) , the accused persons convinced them to open fake Bank Accounts in Indian Postal Payment Banks only in the name of illiterate people of their area for business purpose and they will pay Rs.2000/- per one IPB account . For linking of the IPB account, the accused persons provided the fake SIMs, which they purchased earlier from Odisha, Assam, West Bengal and other States for receiving OTP purpose.

It is suspected that more than 1000 persons operate from Alwar and Bharatpur districts of Rajsthan and tri-junction area of Rajasthan, Haryana and Western Uttar Pradesh (mainly Mewat region, Bhiwandi, Tijara, Kishangadh, Ramgadh, Laxmangadh, Nagar, Govindgadh etc. Investigation of the case is continuing, the EOW said.