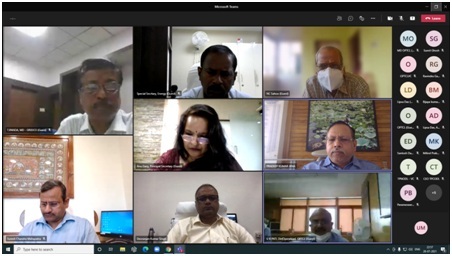 Bhubaneswar: Ensure quality and uninterrupted power supply to all drinking water and mega lift irrigation projects directed Chief Secretary Suresh Chandra Mahapatra to OPTCL and all power distribution companies. Mahapatra gave this direction while reviewing the progress of these projects in a high level meeting held on digital mode from Lokseba Bhawan.

Mahapatra emphatically told that supply of drinking water to the people and irrigation water to the agricultural fields are the priority areas of Government. Uninterrupted power supply to these points should be ensured by OPTCL and distribution companies. He also directed to resolve the problem of insufficient voltage by setting up the dedicated feeders. The distribution companies were asked to verify the voltage requirement as per capacity of the pumps in drinking water and mega lift projects, and, accordingly upgrade the power supply system.

Further, the Chief Secretary directed to construct the power supply line simultaneously with construction of the new projects so that those could be commissioned immediately after completion.

Development Commissioner Pardeep Kumar Jena asked the distribution companies not to give any new connection from dedicated feeders to the drinking water and mega lift projects. OPTCL and the companies were also asked to ensure irrigation water supply during dry spells of the Khariff cultivation.

Principal Secretary Panchyati Raj and Drinking Water Deo Ranjan Kumar Singh appraised that a total number of  13082 number of small and mini drinking pipe water supply projects were commissioned catering to around 1.53 cr population in 16889 villages and hamlets. This included 1043 projects commissioned during the current year. In addition to this, 5624 new small projects were taken up which would cater to around 23 lakh population in 6773 villages.

Available data show a total number of 215 mega drinking water supply projects estimated around Rs. Rs.35,360crhave been planned for catering to around 1.89 cr population in 23750 villages. Out of this 7 projects catering to around 2.95 lakh population have been completed, and, 83 projects are in different phases of construction. Balance projects have been taken up for tendering. Chief Secretary Sri Mahapatra directed to ensure household connection in all mega drinking water supply projects.