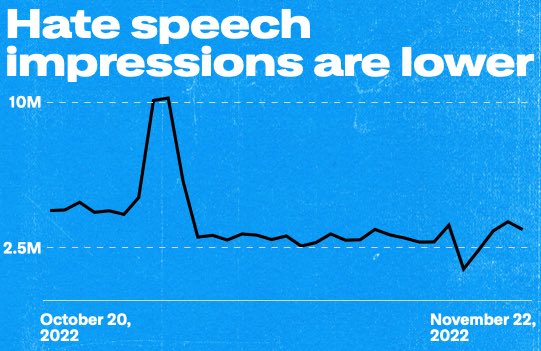 New York: Days after vowing to earn back the “trust of the people”, Elon Musk claimed that hate speech impressions on Twitter were down by one-third from pre-spike levels. Congratulating the Twitter team, the new owner of the social media giant tweeted an image showing the dip in hate speech on the platform.

Hate speech impressions down by 1/3 from pre-spike levels. Congrats to Twitter team! pic.twitter.com/5BWaQoIlip

“Reducing the max allowed tweets per day to a number below what a speed typist on meth could do was helpful,” Elon Musk said, adding that he while he was in “half a mind to wag my finger at the 1500 accounts that caused the spike”, he would resist.

Musk had announced this month that Twitter’s new policy is “freedom of speech, but not freedom of reach”, adding that Twitter will demonetize and not promote tweets containing hate speech or otherwise “negative” content