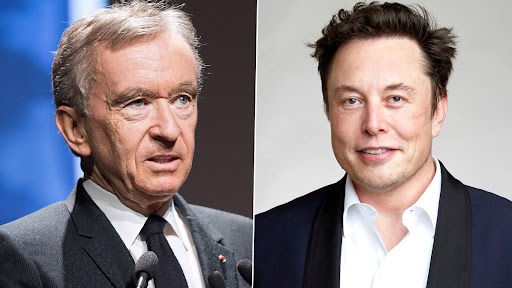 San Francisco: Elon Musk, Twitter’s new boss and Telsa CEO, briefly lost his first position as the world’s richest person to Louis Vuitton CEO Bernard Arnault, who had a net worth of 185.8 billion dollars, almost 400 million dollars more than Musk, according to Forbes.

According to Forbes, Arnault and his family logged personal wealth of $185.4 billion, ahead of Musk which recorded a net worth of $185.3 billion, before reaching around $190 billion.

The main reason behind Musk’s slip in the spot was reportedly his decision to acquire Twitter, which required the Tesla CEO to infuse 44 billion dollars, resulting in a dip in his wealth below 200 billion dollars.

According to Tesla’s shareholders, Musk’s undeterred attention to Twitter prompted Tesla’s stock quantity to keep dwindling, with the CEO himself selling nearly 20 million shares that sum up to around 4 billion dollars.

Musk, CEO and owner of Tesla, Twitter, SpaceX, Neuralink and The Boring Company, contribute to his wealth. Musk regained his position later in the Frobes’ billionaire rankings, which continue to fluctuate during day trading hours.