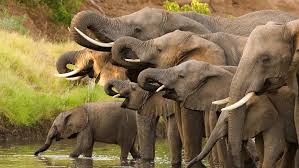 According to sources, the jumbos ventured into human habitat last night after they pulled down the boundary wall of a cashew forest near the hospital here.

On being informed, forest department personnel reached the spot and launched an operation to drive the pachyderms away from human civilisation.

Meanwhile, locals are struck by fear as the risk cloud over the humans residing in the area, sources said.