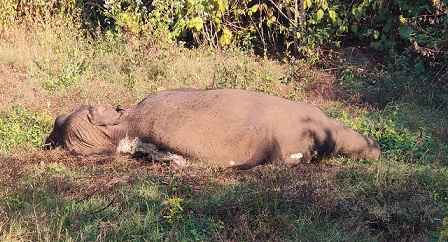 Bolangir/Tarabha: The carcass of an elephant was found near Barpahad reserve forest under Sonepur range in Bolangir district today.

The age of the elephant is estimated to be 2-years-old, sources said.

As per reports, the matter came to fore after some youths, who had ventured into the forest for a feast, spotted the carcass of the elephant and alerted the same to the forest department officials.

On intimation, Narayanpur section officer, Ajay Bara reached the spot and found the body after a hunt. Later, Sonepur ACF, Prafulla Dharua along with Sonepur ranger, Mendha Outpost IIC, and CDVO visited the site and launched a probe. The body has been recovered for post mortem.

While it is suspected that the elephant died of food poisoning, the actual reason behind the death of the jumbo will be ascertained after the post-mortem report arrives, officials said.