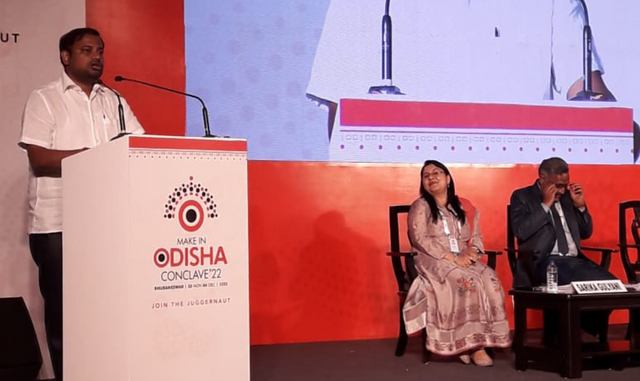 Bhubaneswar: In one of the most anticipated sessions at the ongoing Make in Odisha Conclave 2022, some of the biggest names from the world of technology discussed advancements and investment possibilities in electronics and IT and the ways through which these advancements can be leveraged to achieve economic growth.

The two-hour session witnessed insightful speeches from some of the most prominent names from the Indian technological ecosystem and the exchange of MoUs with some of the biggest companies in the electronics and IT sphere.

The session, divided into two parts, focused on themes “Harnessing Emerging Technological Trends in IT for Economic Growth” and “Expanding the Horizon: Achieving Growth through ESDM” and covered various dimensions such as cloud technology, AVGC, semiconductor manufacturing, and new-age technologies under the ambit of these themes.

Speaking on the occasion, Chief Guest Tushar Kanti Behera, Minister E&IT, outlined the role IT has played in the state’s e-governance efforts. “Technology, particularly IT, is one of the central tenets of the 5T charter of good governance laid out by our Honorable Chief Minister Shri Naveen Patnaik,” he told the audience.

Arvind Kumar, Director General STPI, who graced the occasion as the Guest of Honor praised Odisha for its progress in IT, predicting that “in the next phase of India’s IT Revolution, Odisha will leave all states behind.”

Highlighting Odisha’s centrality to Indian IT, Shri Manoj Kumar Mishra, Secretary E&IT, said, “Odisha is critical for Indian IT since it has great human resources and an exceptional ecosystem to develop tech skills”.

Harnessing Emerging Technological Trends in IT for Economic Growth The first event of the session opened with Mr. Mohit Bhasin, Partner and Global Co-Lead – Economic Growth Practice, KPMG, giving the theme Address. After highlighting the global and national boom in digital activity, he said, “Odisha can capture opportunities in many of these emerging sectors as it is a state where things get done”.

Amit Sharma, Managing Partner, Global Delivery, IBM, put the spotlight on India’s emerging metro cities and the ways they can provide a further fillip to the Indian IT industry. “In this era of economic uncertainty, models which produce higher value are required, and emerging cities which now have great human capital and excellent broadband, railroad, and aerial connectivity are greatly positioned to provide companies with this higher value” he remarked.

Rajat Ojha, CEO Gamitronics, spoke on how there exist innumerable untapped opportunities in the AVGC space for any state to diversify its IT sector. To an amused gathering, he said, “the race in gaming industry has just begun and Odisha with its unique history, culture, and mythology – all essential elements in designing games – can lead the way.”

Shailender Kumar, MD Oracle India, highlighted the increasing relevance of clouds to benefit citizens. He observed, “As India adds 400-500 billion USD annually to its economy, egovernance will be a major driver. And cloud plays a crucial role in ensuring that emerging technologies become pervasive and make e-governance easier.”

In another theme address, Mr. Bhasin highlighted Odisha’s unique advantages which can enable it to become an electronics manufacturing hub.

Shivraj Dharne, India Site Leader and Director of Design Engineering, GlobalFoundries, talked about the role of state and the roadmap India must adopt to become a global chip design and innovation hub. Providing suggestions, he said, “there exist huge opportunities in IP design and governments can focus on that”.

Cooperation between industry and academia is critical to accelerate innovation in ESDM. Dr. Satya Gupta, CEO EPIC Foundation commented on the same, saying, “We need to change the narrative from creating a manufacturing to a product economy and integration between academia and industry is critical for this transition.”

Recent geopolitical volatility has created uncertainty for the ESDM sector but also created scope for India to enhance its manufacturing capabilities in the domain. Pradip Thaker, India Country Head and VP – Engineering, d-Matrix stressed on this window which has opened up, saying “it is an opportune time for India to take maximum advantage of the geopolitical situation and build capabilities in electronics manufacturing.”

The event concluded with the presentation of mementos to the distinguished speakers, awards to various tech companies, and a vote of thanks.

Exchange of MoUs and Agreements

In another highlight of the session, an Agreement with Oracle and MoUs with GlobalFoundries and RailTel were also exchanged during the event. These cover a range of collaboration areasbetween the Odisha Government and the mentioned organizations and are part of the Government’s larger efforts to make Odisha one of India’s preeminent electronics and IT hubs.

As per its Agreement, Oracle is likely to invest Rs 50 crores in Odisha directed towards the implementation of the Oracle Academy Program for identified participating institutions.

GlobalFoundries is expected to invest Rs 100 crores towards collaborating with the Odisha Government in areas such as semiconductor manufacturing related curriculum design and training in engineering institutions, setup of innovation labs, and development of design expertise among start-ups.

As per its Understanding, RailTel will collaborate with the Odisha government in setting up a neutral Submarine cable landing station at Puri which will improve data connectivity and facilitate further growth of the state’s IT sector.

Investments Galore for Odisha in Electronics and IT

The Conclave and its run-up has seen an overwhelming investment response for electronics and IT in the state. A total investment commitment of Rs. 5300 crores has been received so far which is likely to create over 30,000 jobs in the state.

Some of the biggest names which have made investment commitments include Intel, Oracle, GlobalFoundries, Deloitte, IBM, Happiest Minds, Adani Group, EY, and Aaron Capital.

In a commitment that will provide a considerable boost to the state’s electronics manufacturing capabilities, Jupiter International, a manufacturer of high-end solar cells, has made an investment commitment of Rs 1100 crores.

As these figures indicate, there exists considerable exuberance about Odisha among investors and sky is the limit for the state.