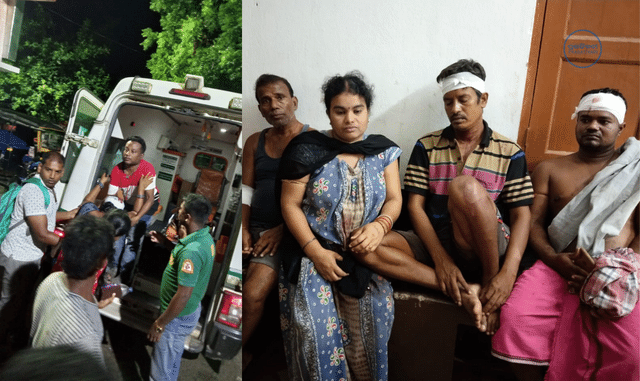 Tarabha: As many as eight persons including three women were injured after a violent scuffle broke out between two families at Kumbharamunda village under Tarabha police station in Sonepur district over a land dispute.

According to sources, a long-standing dispute prevails between the family of Abhimanyu Meher of Runjafatamunda village under Kamsara police out- post 14 km from Tarabha, and the family of Narottam Mishra of Kumbharmunda village for more than four years over a piece of land. A case (64/21) over the matter is also sub-judice with the Tarbha JMFC Court.

However, at around 6.30 pm this evening both the families entered into a violent clash following which members of both sides sustained injuries.

The injured have been identified as Abhimanyu Meher (60), Gangadhar Meher (31), Makunds Meher (35), Lakshmi Meher (35), Kuni Meher (32), Doleshwari Barik (35), Narottam Mishra (65) and Madhusudan Bedbagh (65) were seriously injured in the scuffle and were initially rushed to Tarbha Hospital for first-aid.