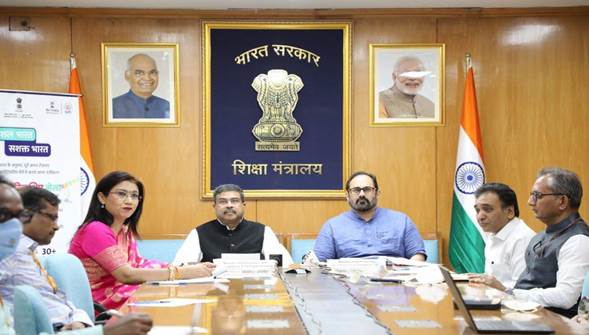 Over 4000 organisations from more than 30 industries, including power, retail, telecommunications, IT/ITeS, electronics, automotive, and others, participated in the event. Individuals having a 5th–12th grade pass certificate, a skill training certificate, an ITI Diploma, or a graduate degree were eligible to participate in the PM Apprenticeship Mela. The main objective of this programme was to encourage the hiring of approximately One lakh apprentices and to assist employers in identifying and developing their potential through training and practical skillsets.

In addition, the young and aspiring workforce was given a choice of 500+ trades, including welder, electrician, housekeeper, beautician, mechanic, and others. They were given on-the-spot apprenticeship offers with monthly stipends as per the government standards.

Following, they will get monthly stipend as per the Government standards for developing new skills, an opportunity to earn while they learn. The candidates will get certificates, recognized by National Council for Vocational Education and Training (NCVET), increasing the chances of their employability after the training.

Speaking at the launch of the National Apprenticeship Mela, Shri Dharmendra Pradhan, Union Minister of Education and Skill Development & Entrepreneurship, said, “I am happy that more than 4,000 organisations across 700 locations in the country are participating in this mela to provide gainful employment opportunities to our youth. It is satisfying to see job providers from manufacturing, electronics, services, power, IT/ITES, railways, retail and several other emerging areas line-up for the Apprenticeship Mela.

Pradhan said that after 34 years we have a New Education Policy in Place which is a roadmap for India’s transformation in this AmritKaal. Academic credit will be awarded to apprentices which can be used for future pathways. We have to make apprenticeship a participatory movement to skill, re-skill and up-skill young India, boost per capita economic productivity and drive national missions.

“Going forward the PM National Apprenticeship Mela will be a monthly affair. A digital dashboard will be set-up to further streamline the apprenticeship process and connect our youth with relevant opportunities in the 21st century. Our endeavor will be to ensure that more than 10 lakh trainees engage with corporates as apprentices and capitalize on this opportunity to earn while they learn and find their gateway into the industry,” he further added.

Speaking on the occasion, Rajeev Chandrasekhar, Minister of State for Skill Development and Entrepreneurship and Minister of State for Electronics and Information Technology, said, “Post covid our focus is to increase our employable skills and thus the employability. As our Prime Minister has stated, skilling, re-skilling and up-skilling should be taken as a continuous ladder of opportunity. Apprenticeship is one of the most sustainable models and the concept is central to create an enabling partnership between govt, skill delivery ecosystem and employment ecosystem. Ministry of Skill Development and Entrepreneurship has brought in comprehensive reforms to the Apprenticeship Act and the Apprentices Rules in 2014 & 2015 and now it should be taken as a dynamic evolving platform to connect the skilling ecosystem to both who are getting skilled and those seeking skilled talent. The Apprenticeship model should also be taken as an important feedback mechanism from the industry to make the ecosystem more demand driven and impactful.  PM National Apprenticeship Melas will serve as a strong platform to connect industry with youth.”

Establishments participating in the PM National Apprenticeship Melas get an opportunity to meet the potential apprentices at a common platform and select the candidates on-the-spot. In addition, even small-scale industries with minimum four working members can also hire apprentices at the event. A credit bank concept is will also be soon introduced which will have depositary of various credits accumulated by learners that they can use for future academic pathways.

During the interaction, Shri Dharmendra Pradhan was particularly impressed by the entrepreneurial spirit of a young trainee from Bhubaneswar. Undergoing apprenticeship in the Baker & Confectioner trade at Govt. ITI Bhubaneswar, she plans to start her own bakery. He encouraged all stakeholders to broaden their imagination to further expand the scope and scale of apprenticeship. Industry-linkages based upon the opportunities present in local economies will go a long way in massively increasing apprenticeship opportunities for the youth.

The PM Apprenticeship Mela has been a great opportunity for the participating establishments, as they were able to meet potential apprentices on a single platform and choose applicants based on their requirements. In addition, small-scale industries with a minimum of four employees were also able to hire apprentices at the mela.