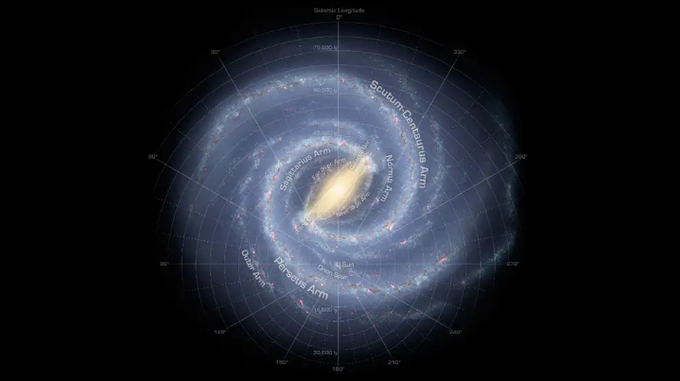 Tokyo: In a new development in our universe, Earth just got 7 km/s faster and about 2000 light-years closer to the supermassive black hole in the centre of the Milky Way Galaxy.

A new cosmic map has suggested that the Earth is spiralling 2,000 light-years closer to the supermassive black hole located at the centre of our Milky Way galaxy than previously thought. But don’t worry, our planet is not plunging into the black hole anytime soon as it is still thousands of light-years away from the black hole.

The new map constructed by the astronomers from the National Astronomical Observatory of Japan (NAOJ) is developed using data collected over the past 15 years. It places Earth just 25,800 light-years away from the centre of the galaxy where the black hole resides.

In 1985, the International Astronomical Union estimated the official value to be around 27,700 light-years. This means that our planet is now nearly 2000 light-years closer to the black hole.

Based on the information obtained, the astronomers also analysed the position and velocity map of the galaxy. From this, the team calculated the centre of the galaxy—as every object in the galaxy revolves around it. The velocity component of the map suggests that Earth is travelling at 227 km/s as it orbits around the Galactic Center. This is calculated to be 7 km/s faster than the official known value of 220 km/s.

The black hole found at the centre of our galaxy is known as Sagittarius A* and is said to be 4.2 million times more massive than our Sun.

The first projection was captured in 1985 by the International Astronomical Union, but the Japanese radio astronomy project VERA has been probing the distance and speed for 15 years to create an up-to-date model.

VERA is comprised of radio telescopes across Japan, allowing astronomers to collect data similar to that of a 1,430 diameter satellite dish.

It launched in 2000 with the task of calculating the distance to radio-emitting stars by analyzing their parallax.

‘Because Earth is located inside the Milky Way Galaxy, we can’t step back and see what the Galaxy looks like from the outside,’ NAOJ shared in a statement.

Based on the VERA Astrometry Catalog and recent observations by other groups, astronomers constructed a position and velocity map.

The team calculated the center of the Galaxy, the point that everything revolves around, to start the map.

Once it was complete, they were able to determine the center of the Galaxy, which is home to Sagittarius A, is located 25,800 light-years from Earth.

The velocity component of the map indicates that Earth is travelling at 141 miles per second as it orbits around the Galactic Center.

This is faster than the previous value of 136 miles per hour.

Count On These Easy Home Remedies For Vomiting