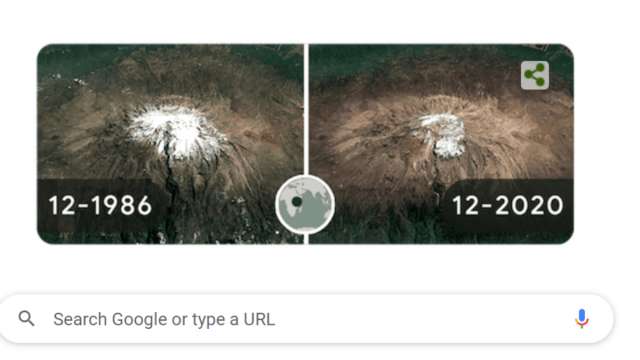 The doodle has a series of animations of four locations. This animation is being created to showcase how climate change has affected the Earth. The animation contains images from different years.

“Using real time-lapse imagery from Google Earth Timelapse and other sources, the Doodle shows the impact of climate change across four different locales around our planet. Stay tuned throughout the day to view these scenes, each remaining on the homepage for several hours at a time,” said the search engine giant.

The four images in the animation are from Mount Kilimanjaro in Tanzania, Sermersooqin Greenland, Great Barrier Reef in Australia and Harz Forests in Germany’s Elend. These animations will change after every hour.

The first animation will have the image of Mt Kilimanjaro. Google has highlighted the glacier retreat at the summit of the mountain from 1986 to 2020. the next animation contains the imagery of Sermersooq to show the impact of climate change from 2020 to 2020.