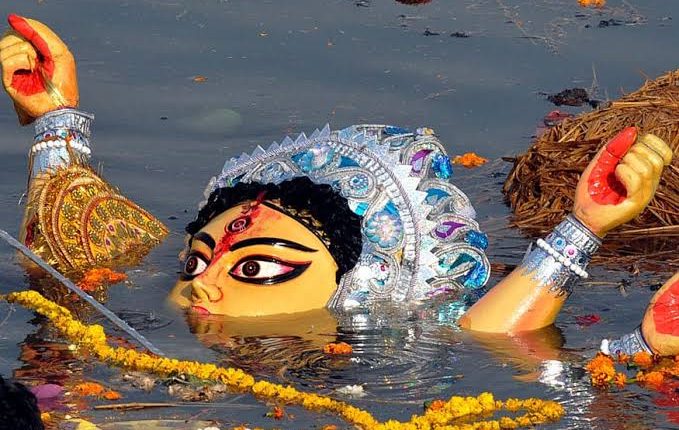 Bhubaneswar: The five-day-long Durga Puja festival has come to an end with the customary idol immersion ceremony of Maa Durga scheduled for today (Thursday). A large number of devotees will bid adieu to the Goddess by immersing the idols in water bodies today.

As per Bhubaneswar Municipal Corporation (BMC) sources, as many as 17 platoons of police force have been deployed to maintain law and order during the immersion ceremony in the Capital City. Special route charts have been allotted to three ‘Bhasana’ committees to carry idols from the pandals to the makeshift ponds in a staggered manner during the procession. Elaborate arrangements have been made for proper traffic management during the ‘Bhasana Utsav. Three Additional Deputy Commissioners of Police (ADCPs) would supervise the arrangements. Commissionerate police have issued strict orders for the puja committees to keep the level of DJ sound within 65 decibels.

Meanwhile, as many as three artificial immersion ponds have been kept ready for the immersion of the Durga idols in the Millennium city of Cuttack. A total of 55 platoons of police force will be deployed in the city and immersion site to control overcrowding, mishaps and untoward incidents. Around 300 CCTV cameras have also been installed at various places in the city to keep a watch on the situation. A total of 172 idols will be immersed in Devi Gada.