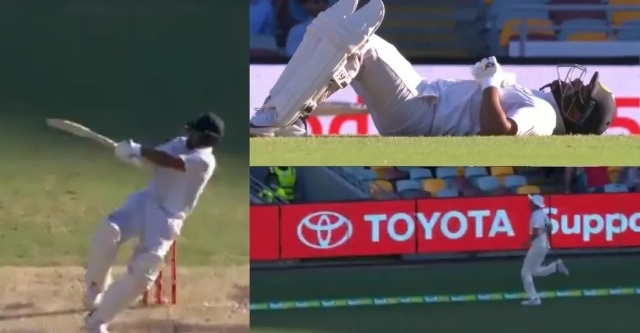 Dropped By The Wicket-Keeper Time, Pant Must Play Like A Man Spared To Rule

No one buys a fancy car to crawl like a tortoise. Yet hardly anyone drives fast to meet his maker. The young just wish to soar above the tedious and the commonplace. ‘Feeling alive’ is a worthy pursuit. Speeding is how you leave the rest of the world behind. You just do not want to leave it too far behind. How much speeding can then be decried as over-speeding? If you cannot give the Sun and the Moon a miss, you would be better off driving a bullock cart. If you can the jump the craters and navigate the breakers, Sir, you are within your limits. They say that the drink from a glass filled to the very brimful must not get spilled for the speed to be dubbed as ‘respectable’. One must be able to light up a joint for the speed to be labelled ‘safe’. If you cannot spot a beautiful woman asking for a lift, or in need of help, and just whizz past her, you are driving faster than life. There is no James Dean Line that you must not cross. There is no Garfield Sobers Limit that is absolutely safe.

On a fateful night in 1959, Collie Smith was fast asleep on the backseat of the car that Gary Sobers dashed against a truck coming in towards him and cost the West Indies one of their most promising all-rounders. Gary escaped unhurt, paid a token fine, but carried a permanent scar on his conscience. He responded well to this just sense of guilt. He decided he must contribute for two players; that he had to bat and bowl for his friend Collie as well. The added pressure transformed him into a greater player on the field. Off it, he had trouble remaining inside his hotel room, and found escape in night-outs and heavy drinking. Sobers could nevertheless succeed for the era was not one that of cut-throat professionalism, nor was media scrutiny as intense as it is now.

The year was 1961. Tiger Pataudi had just gotten into the front seat of a car when a larger automobile rammed into their vehicle. A glass shred entered his right eye and damaged it permanently. But he did not let this disability hamper his ambition. Pataudi made his debut six months after the accident, later became India’s youngest captain and went onto enjoy a fairly fulfilling cricketing career. Thankfully, Pataudi’s right eye was not the lead eye when he took the stance, but unfortunately, Colin Milburn’s was.

The English batsman, the stocky, talkative, cheerful Colin, had enjoyed a start-stop career involving nine test matches, when he was involved in a car accident in 1969 that damaged his left eye for good, and hampered vision in the right one as well. Unfortunately, this was Milburn’s lead eye, and he could not make a successful comeback to the Test arena.

In 1992, Dhruv Pandove hailed a cab to travel to his hometown, Patiala, but a major road accident took away this prodigy. I remember listening to a clip in DD News the next day. For a cricket-mad ten years old, this was a huge blow. I had welcomed Sachin, and then Kambli, into the cricketing pantheon. A story in Indian Express had presented Pandove as the next big thing. I was deeply affected by Pandove’s death- a player I had not seen batting, nor knew much about. But I had pinned high hopes based upon a newspaper article. When Yuvraj Singh arrived on the scene, it felt like an unfulfilled promise was being realized.

Ben Hollioake slammed his Porche 944 into a wall in 2002 in Australia, and left the English cricket poorer, and heartbroken. India is lucky that we are not in a state of mourning today. A swashbuckling idiot is spared by the Wicket-keeper Time to serve the Test cricket a bit more. Car accidents are quite touch and go. Cricket has been lucky with Flintoff, who has survived not twice, but lost Andrew ‘Roy’ Symonds last year, lost to the need for speed, and lack of control. More than relieved, I am angry.

What kind of a daredevil son of a bitch performs such amateur tricks like flying solo in an automobile on a wintery night? He is not a has-been. He was not even injured, or out of form, to justify loss of control. Why could Rishabh Pant not even find a mate to hop alongside him? The answer is simple in coming. The kind that tamed the Ozzies at the Gabbatoir by going on a counter-strike. The kind who was asked by Tim Paine to babysit for him and his wife. The kind who gets occasionally picked upon by an attention-junkie named Urvashi Rautela because she is oh, so miffed. Welcome back, Rishabh Rajendra Pant. Welcome back to the world of the living. You had very nearly escaped to the netherworld thanks to your stupidity. This was not how India would have liked to pull curtains upon 2022, but now that you have escaped with knee-ligament injuries, we would gladly take this mishap and move on. Here is hoping that Pant doesn’t get too rattled by this trauma or cuts back on his aggression. The only change he needs to effect is to open his purse-strings and hire a good driver.