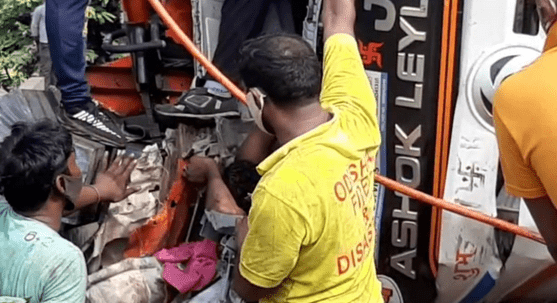 Driver Rescued After Being Trapped In Mangled Truck For Hours

Muniguda: A truck driver was trapped in a vehicle after an accident for over three hours near Badigaon bridge on Bissamcuttack-Therubali road in Rayagada district on Sunday.

As per reports, the incident took place when the truck driver lost control over the vehicle and turned turtle. However, the helper of the vehicle managed to come out of the ill-fated truck.

Later, locals alerted the Bissamcuttack police and firefighters about the same.

On being informed, police along with the firefighters rushed to the spot with a rescue vehicle and rescued the trapped driver after three hours of operation.

The driver was rushed to Bissamcuttack Community Health Centre (CHC) in critical condition.