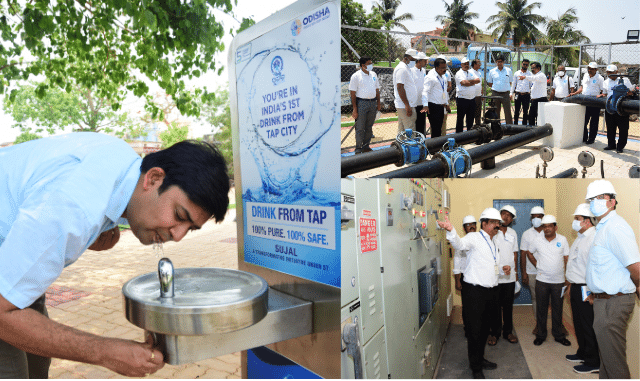 Bhubaneswar: The success of 24×7 Drink from Tap (DFT) Mission for the ULBs launched in Odisha under the leadership of Chief Minister Naveen Patnaik has become a national model. Government of India has issued a notification for adoption of the model in different parts of the Country.  Odisha Water Academy has been empanelled as a Leading Capacity Building Institute at National Level. Chief Executive of WATCO, Odisha has also been included as a member of the National Task Force.  This was known from an interactive session held between a high-level administrative team from Karnataka, and Officers from the Government of Odisha recently.

A 20-member Karnataka Team consisted was led by Secretary Urban Development of the State Dr Ajaya Nagbhusan, and Managing Director Karnataka Urban Water Supply and Drainage Board K.P. Mohan Raj. They had an interactive session with Principal Secretary Housing and Urban Development Sri G. Mathivathanan along with Senior officers of the department at Water Academy of Odisha.

Mainly the technological, executive, operational, upkeep, outreach, and replication facets of the Mission were discussed in the session. Chief Executive Officer of WATCO Pradeepta Kumar Swain, Managing Director Sarat Kumar Mishra along with senior engineers of the department appraised Karnataka Team all about the Mission. After one day interaction in different sittings, the Team visited various parts of Puri and Bhubaneswar to have field-level exposure, and see the effectiveness of the Mission activities at ground zero level. Members of the team also drank water from the tab directly. They expressed deep satisfaction with approach and effectiveness of the Mission.

Available data show that the scheme has been rolled out for entire population in Puri Municipality. Presently, a population of around 2.5 lakh in Puri is using the water directly from tap for drinking and cooking without further filtration. The project is being rolled out in Bhubaneswar and Cuttack cities. For the purpose, Bhubaneswar has been divided to 98 zones out of which 24×7 DFT has already been started in 10 zones.

ECO Mr Swain said, “The major areas who are getting DFT water includes Niladri Vihar, Sahid Nagar, Kalinganagar (K-8 and K3-V), Ishaneswar Basti, Salia Sahi Basti, Puleswar Basti, VSS Nagar, and Satya Vihar near Rasulgarh. Target has been fixed to supply water for around 11 Lakh population in Bhubaneswar Capital City by end of December, 2023”. Similarly Cuttack city has been divided to 14 Zones for DFT out of which 2 Zones have been completed. Work is also going on for completing the project in Brahmapur city by August 2023. The project is simultaneously being implemented in different ULBs of Sundargarh, Mayurbhanj, and Jajpur districts. It has been targeted to cover major 17 cities of State under the Mission by December, 2023.

Under the Mission, water is purified as per the parameters of ISN-10500, and then supplied to the consumers on 24×7 basis. Before actual supply, the pipelines are checked thoroughly, and necessary replacements are made. Regular testing and quality monitoring is done through a modern water testing laboratory already established and made operational in the State.  Chlorine dosing systems with automated programmable logic controllers (PLCs) are installed at the consumer points for ensuring the supply of appropriate quality.

CEO WATCO Mr Swain said, “As water in the supply pipes remains under definite pressure for 24 hours, there is no chance of blockage anywhere, and as such, water in the supply pipeline does not get blocked or contaminated”. In case of any detection, the automated PLCs send immediate signal to the Control room, and the automatic correction system gets activated with signals from the control room. He added, “We also fix LED display boards about the quality of supplied water in different parts of the town for informing people, and building confidence in them”.