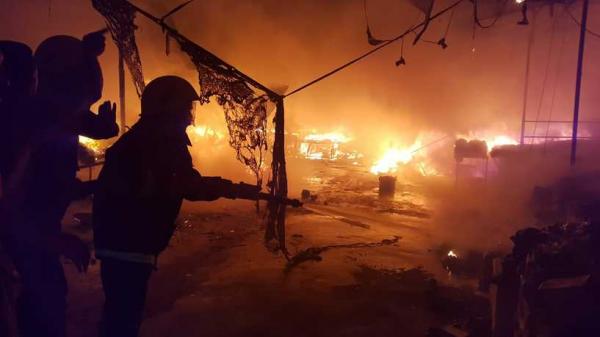 Baghdad: At least 50 people were killed and dozens injured in a fire likely caused by an oxygen tank explosion at a coronavirus hospital in Iraq’s southern city of Nassiriya.

The fire broke out at the Al-Hussein hospital in the southern Iraqi city of Nasiriyah late Monday and was brought under control by local civil defence forces.

The ward had space for 70 beds.

The deadly hospital blaze is the second such fire in Iraq in three months.

Outside the hospital, dozens of young demonstrators protested.

The fire also prompted furious calls on social media for the resignation of top officials.

Local authorities imposed a state of emergency in Dhi Qar governorate, of which Nasiriyah is the capital, and ordered doctors on leave to help treat the injured.

Iraqi Prime Minister Mustafa al-Kadhemi held an emergency meeting with ministers and security heads to “find out the causes” of the fire, his office tweeted Tuesday.

Already decimated by war and sanctions, Iraq’s healthcare system has struggled to cope with the coronavirus crisis, which has killed 17,592 people and infected more than 1.4 million.

In April, a fire caused by an oxygen tank explosion at a Covid-19 hospital in Baghdad killed at least 82 people and injured 110 others.