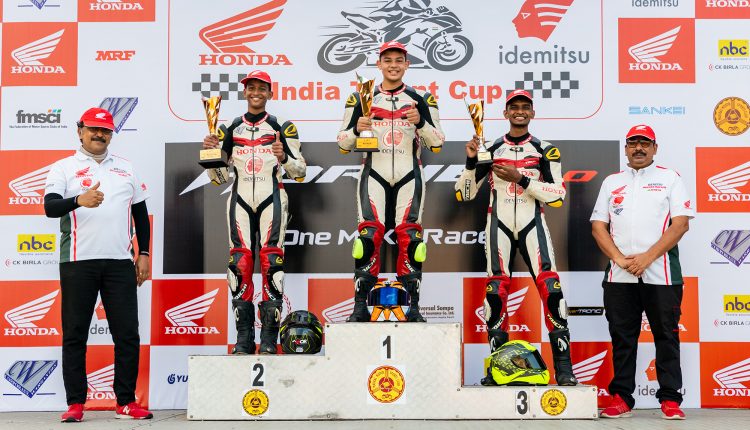 Chennai: The curtain went down today at Madras Motor Race Track with the final day of 2021 Indian National Motorcycle Racing Championship Round 1.

Continuing to gain on the points tally, the IDEMITSU Honda SK 69 racing team’s Rajiv Sethu with his consistent performance grabbed a double podium finish for the team. Alongside the national championship, the IDEMITSU Honda India Talent Cup saw energetic Kavin Quintal sealing top spot in NSF250R open class whereas it is a double 1-2 for Rakshith S Dave and Prakash Kamath in the CBR150R Novice class.

Speaking on the final race day of round 1, Mr. Prabhu Nagaraj, Senior Vice President, Brand & Communication, Honda Motorcycle & Scooter India Pvt. Ltd. Said, “IDEMITSU Honda SK 69 racing team has wrapped up the opening round with 2 podiums in PS165cc of national championship.Rajiv Sethu’s strong performance in this round confirmed his 2nd place in the championship.Parallely, Kevin Kannan left no stone unturned in exhibiting the capabilities of the all-new Hornet 2.0 on racetrack. Our 26 young guns had put up a wonderful show today. NSF250R rider Sarthak Chavan proved his mettle on racetrack after an incredible jump of 10 positions in today’srace.I am confident that our riders will be backwith same motivation and strength toperformbest to their abilitiesin the upcoming rounds.”

Racing on the Moto3 machine, race 2 of NSF250R was dominated by Chennai’s Kavin Quintal who overpowered others with a massive lead of 9.863 seconds. Outpacing the pack was Pune’s Sarthak Chavan who started the race from last, steered ahead of the rest claiming 2nd position on podium with total time of 15:01.335. Behind Sarthak was Varoon S who in his battle for getting the third place, crashed out in during lap 6. After Varoon’s unfortunate crash, the battle raged on for 3rd spot between Bengaluru’s Samuel Martin and Chennai’s Geoffrey Emmanuel who finally finished 3rd and 4th respectively.

trackonce again with a comfortable lead of 6.313 seconds. He was followed back home by Prakash Kamath of Bokaro Steel City. Competing neck to neck for the third spot, Shubankar Joshi and Theopaul Leander crashed in the last lap. Their crash confirmed Shyam Babu’s third place at podium.

Inaugural round of Honda Hornet 2.0 One Make Race

The race 2 of Honda Hornet 2.0 One Make racesaw changing statistics with every lap.Quicklymoving up from 5th position start to 3rd position in Lap 1, Alwin Sundar held in a 3 way side-by-side racing action with Sudheer Sudhakar & Kavin Kannan. In a nail-biting race to battle for glory, Chennai’s Kevin Kannan lapped back home just 0.010 seconds ahead of Delhi’s Sudheer Sudhakar. Entering the track after five years, Chennai’s Alwin Sundar completed the race at third position, registering the best lap time of 2:12.371.

Projects In Odisha Are Being Given Priority For Speedy Construction Work: Union Railways Minister