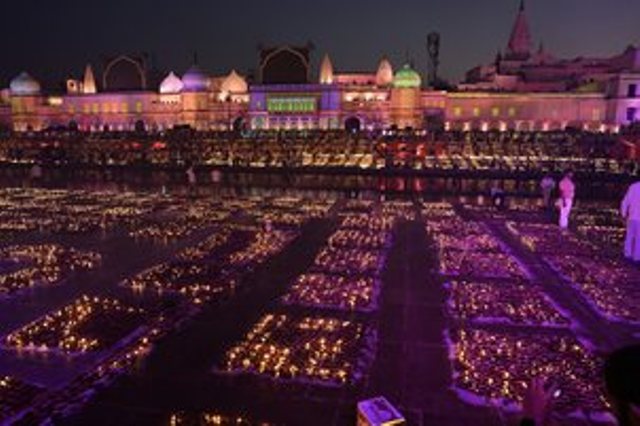 Diyas Used For Deepotsav In Ayodhya Made Of Cow Dung

Lucknow: Lakhs of Diyas which were lit to mark the Deepotsav in Ayodhya were made of cow dung. A resident of Muzafgarnagar, Sandeep Arya has tremendious role behind the cowdung-made lamps.

Diyas were made using cow dung by more than 300 women associated with the ‘gaushala’ (cow shelter) run by Arya.

The diyas were given to the Ayodhya administration and were lit on Deepotsav.

This was the sixth edition of Deepotsav, organised every year by the Yogi Adityanath government a day before Diwali. Around 15.76 lakh diyas were lit on the banks of the Saryu during the celebrations, a Guinness World Record.

“I am feeling emotional. I have no words to express myself and my feelings,” he told PTI on phone.

“More than 1 lakh lamps were made by 326 women, and it took them around 10 months to make them. Multani mitti was also added to the cow dung while making the lamps, so that the flame glows,” he said.

Arya said there are around 150 cows in his ‘gaushala’, which is operating since 2018.

“I also took cow dung from my farmer friends to make the lamps. And, I feel that the cow is not a problem, it is indeed a solution,” he said.

Arya said apart from making lamps, his team also makes items which are used in ‘havan’ and idols of Gods and Goddesses.

Apart from Arya’s ‘gaushala’, others from across the state also contributed diyas for the deepotsav