Yesterday, Divya Khosla Kumar stood up in support of Pearl V Puri in the ongoing case against him by uploading the true story on what had really transpired and vouching for his nature and reputation.
After the actress posted the story on her Instagram page, she has unfortunately been victimised by social media trolls and was flooded with rude and hurtful messages from them. 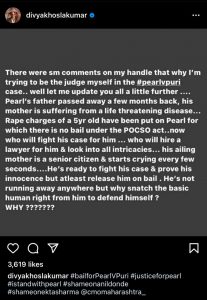 Here is what she shared –

There were sm comments on my handle that why I’m trying to be the judge myself in the #pearlvpuri case .. well let me update u all a little further …. Pearl’s father passed away a few months back , his mother is suffering from a life threatening disease… Rape charges of a 5yr old have been  put on Pearl for which there is no bail under the POCSO act ..now who will fight his case for him … who will hire a lawyer for him & look into all intricacies … his ailing mother is a senior citizen & starts crying every few seconds….He’s ready to fight his case & prove his innocence but atleast release him on bail . He’s not running away anywhere but why snatch the basic human right from him to defend himself ? WHY ???????

Divya Khosla Kumar surely has set an example for a lot of people and inspired them to stand in support of Pearl V Puri. She even had the courage to call out the hateful commenters on her post, something which not a lot of people go through with. More power to her!

Mysterious! Kartik Aaryan Coming Back With Something Different

Mysterious! Kartik Aaryan Coming Back With Something…

Ryan Crouser Breaks 31-YO Shot Put Record At US Olympic…