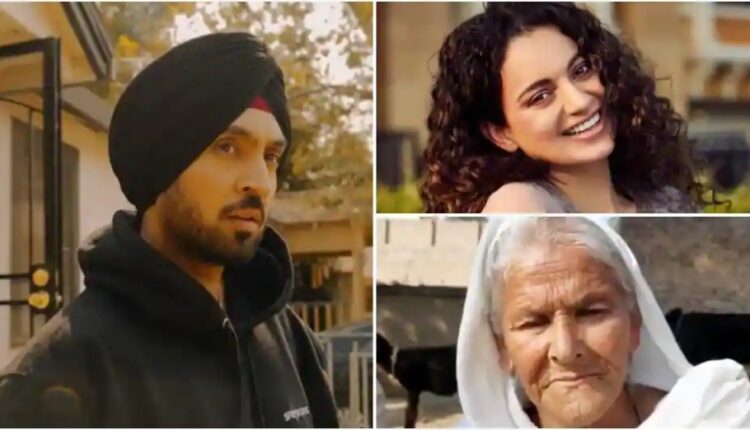 Chandigarh: Diljit Dosanjh has joined multiple Punjabi stars as they rebuked actor Kangana Ranaut’s latest Twitter drama. Twitter was abuzz on Thursday as Kangana Ranaut and Diljit Dosanjh were locked in a war of words. It all started when the singer called out Kangana for the mistaken identity of an elderly Sikh woman as the actress referred to her as Bilkis Bano and said that she is protesting for Rs 100 a day.

While Kangana soon deleted the tweet, the damage was already done. After Prince Narula, Sargun Mehta, Himanshi Khurana and others, Diljit, too, has slammed Kangana as someone who ‘says anything’.

What followed was an ugly war of words and to every attack from Ranaut, Dosanjh had a counter attack in shudh Punjabi.

Replying to Diljit’s tweet, Kangana then wrote, “Oh chamche chal, tu jinki chat chat ke kaam leta hai, main unki roz bajati hoon,jayada mat uchal,main Kangana Ranaut hoon tere jaisi chamchi nahin jo jhoot boloon,maine sirf aur sirf Shaheen Baag wali protestor pe comment kiya tha, if anyone can prove otherwise I will apologise. (Oh come on you bootlicker, the ones you butter up to get work, I teach them lessons every day. Don’t get too excited. I am Kangana Ranaut, not a bootlicker like you who will lie, I only commented on Shaheen Bagh protester).”

Replying to Kangana, Diljit wrote that she doesn’t have the manners to talk to someone’s mother or sister. He further wrote that despite being a woman herself, she talks about other women in a derogatory manner. “SADE PUNJAB DIAN MAAVA SADEY LAI RAB NE.. Eh tan Bhoonda De Khakhar nu Shedh Leya Tu.. PUNJABI GOOGLE KAR LI. (Our mothers are equivalent to god for us. You have stirred up a hornet’s nest. Google the Punjabi).”

After Diljit Dosanjh’s tweet, Kangana wrote, “I had only commented on Shaheen Baag dadi cos they instigated riots there even that tweet was deleted almost immediately, I don’t know from where they brought another elderly lady in to the picture and now endlessly spreading lies.Vultures trying to instigate mob against a woman.”

Diljit then wrote, “Gal Kehdi Ho Rahi aa Eh Ja Kidar Nu Rahi aa ..?Dimagh theek aa Tera? Gallan Na Ghumaa.. Sidha Jawab de.. Jo bhonki an Tu sadian maava Lai..Aa Ke Gal Kari Sadian Maavan Naal Jina Nu Tu 100 Rs Di Dasdi c .. Sari HEROINE Giri Kadh Den gian.. (What direction is this conversation heading to? Is your mind okay? Don’t steer the conversation in circles, be straightforward about what you barked about our mothers. Come and talk to our mothers, on whom you commented, they will drive out all of that attitude from within you).”