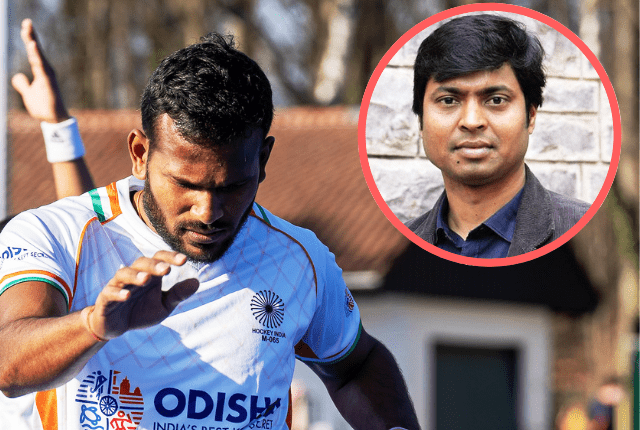 Bengaluru: The Indian Men’s Hockey Team Defender Amit Rohidas is geared up for his first Olympic campaign in Tokyo this year. The 28-year-old defender, who has played 97 matches for the national side, expressed that it has taken him 12 years to fulfil his dream of being a part of the Olympic squad.

“It has taken me 12 years to reach here. I am extremely delighted to be part of the Olympic squad, one of my biggest dreams has been fulfilled now. I am thankful to every Coach who helped me to groom as a Hockey player. My sole focus is to have a successful campaign at the upcoming Tokyo Olympics and the recent successful tours have definitely been a boost for the Team’s confidence,” said Amit.

Being born in same village in Sundargarh as a three-time Olympian and former India Captain Dilip Tirkey, Amit said, “He (Dilip Tirkey) has inspired many from my village to look at Hockey as an engine of change. From where I belong, Hockey is not only a sporting discipline but a vehicle for socio-economic growth. I have become the first non-tribal Hockey Olympian from the state of Odisha.”

Having honed his skills at Panposh Sports Hostel, Rourkela, Rohidas made his India debut at the Sultan Azlan Shah Cup 2013 in Malaysia. He was part of the team that won the Silver Medal at the 2013 Asia Cup and was also named as the Vice-Captain of the junior national team for the 2013 FIH Junior Men’s Hockey World Cup held in New Delhi.

“I started playing in my village, and later I joined the Panposh Sports Hostel in Rourkela to hone my hockey skills. I played there as a Forward initially but my Coach advised me to switch to a Defender position. My first big break came in 2009, when I was selected for the U-18 Asia Cup, and bagged the Best Player of the Tournament award for my seven goals. Then, I featured in the Silver medal-winning Indian Team of Sultan of Johor Cup in 2013. I was then finally promoted to the Senior Team. Soon after, I was named as Manpreet Singh’s deputy for the FIH Junior Men’s World Cup held in Delhi, where we couldn’t do well, and I felt like everything was over for me,” he said while sharing about his journey.

However, the 28-year-old player had to wait till 2017, to cement his place in the senior national team. After having impressed everyone with his defensive duties in the 2017 Hockey India League, Amit finally made his comeback to the national side on the Belgium tour and since then he has been an integral part of the team.

“I got a chance to feature in the Hockey India League, alongside legendary players like Moritz Fuertes, Ashley Jackson, and Austin Smith. I started my club career in 2013 with Ranchi Rhinos, which won the title that year, and I was a part of Kalinga Lancers that became Champions in 2017. After a good campaign at Hockey India League, I finally made my comeback in 2017 with the Belgian tour, and ever since, be it the World Cup, the Asian Games or the Commonwealth Games, I haven’t looked back,” the India defender concluded.