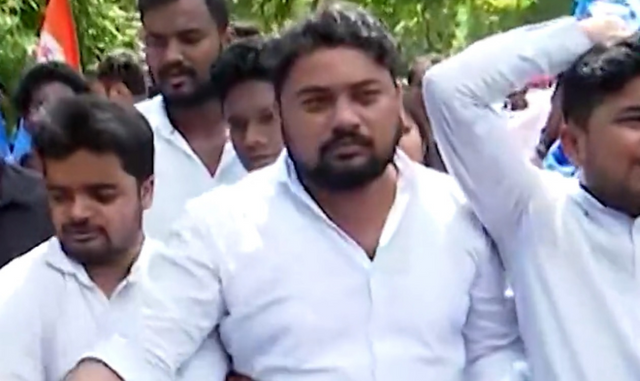 Bhubaneswar: Hundreds of Chhatra Congress activists on Wednesday tussled with police while trying to barge into the residence of School and Mass Education Minister Samir Ranjan Dash, demanding his ouster from the State Cabinet and immediate arrest for his alleged involvement in the death of Zilla Parishad member Dharmendra Sahu.

The protesters led by Chhatra Congress president Yasir Nawaz took out a bike rally and reached the minister’s official quarters. They hurled tamotoes and eggs at the gate of the minister as a mark of protest.

The security forces face a tough situation to control the protesting members of the Opposition party. The area turned into a virtual battle ground for quite some times after a brawl broke out between the police and the agitators.

The Congress activists said that the minister should be arrested and ousted from the Cabinet as he is directly involved in the death of his own party leader.

“We demand the arrest of Minister Samir Dash and his ouster from the Cabinet also. It is now clear from the audio clip which went viral on social media that he is involved in the death of Sahu. If he continues to remain in power, the investigation proess would be affected what was seen in the case of Ruchika, Mamita Meher,” Nawaz said.

If he was not arrested within a wekk, Chhatra Congress would congregate in thousands in front of Naveen Niwas. The government would be responsible if untoward situation arises, he warned.

On Tuesday, an audio clip went viral on social media in which Dharmendra Sahu purportedly talked to some one saying minister Samir Dash would be responsible for his death.

Meanwhile, a team of police will also visit Gop in Puri district, which is the native place of the deceased leader. The team might question some relatives and extract information regarding the number of people who talked to Sahu over phone before his death.