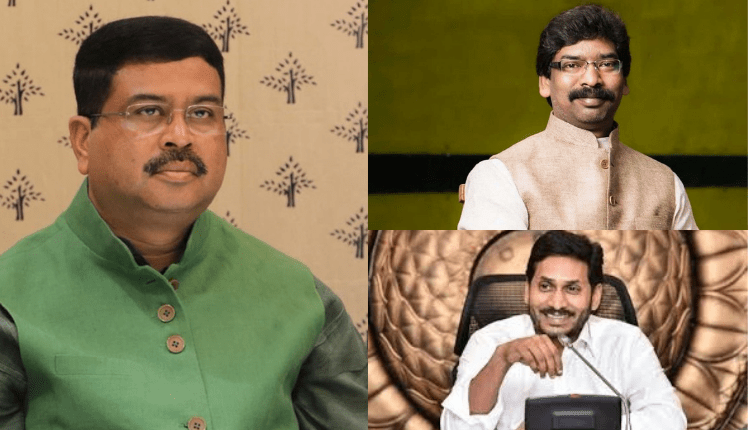 Pradhan today shot a letter to Jharkhand Chief Minister Hemant Soren seeing his personal intervention for implementation of the values enshrined in the New Education Policy 2020, and preserving the best interests of Odia speaking school children in Jharkhand.

Underscoring the shared history of Odisha and Jharkhand which goes back to ages and binds the two states together till this day, Pradhan said that Saraikela and Kharsawan districts in Jharkhand were once Odia speaking princely states, and among two of 26 Garhjats which made up the State of Odisha.

During State reorganization exercise in 1948, these two princely states were clubbed with the erstwhile Bihar State which has become present-day Jharkhand. It is estimated that around 20 lakh Odia speaking people live in Jharkhand today concentrated around Kolhan Division of Jharkhand consisting of Saraikela-Kharsawan, East Singhbhum and West Singhbhum Districts apart from smaller populations in Ranchi, Gumla, Dhanbad, Bokaro, Simdega, Lahardega and Latehar districts.

These regions took active part in the Indian freedom movement, as well as in the movement to create a linguistic province of Odisha, which hinged its legitimacy on the Odia language. Noted freedom fighter Pandit Gopabandhu Das conducted a massive outreach in the Saraikela-Kharswan and Singhbhum areas and as a result more than 300 Odia schools were set up during the period of 1913 to 1948. Odia was, therefore. used in the land records and schooling in these regions. 5. During the formation of Jharkhand, it was ensured that newly formed state shall recognize Odia speaking people as linguistic minorities and shall preserve their rights. After a series of struggles and agitations, on 1st September 2011, Government of Jharkhand recognized Odia, along with five other regional languages, as the Stale’s second official language.

I appreciate the efforts made by the Government of Jharkhand to continue Odia medium schools in these border districts, however owing to following issues the number of such schools are on the decline:

Grade I and 2nd. Further, the Odia language text books for Grade 9m to 12th have not been adopted by JAC, which forces Odia speaking students to drop the language subject and opt for Hindi: e. The grant-in-aid/fellowship for linguistic minority scholars for research and education purposes in Odia language has almost been abolished or are not being awarded.

Article 350 (b) of Indian Constitution provides safeguards for the linguistic minorities in India. Govt. of India’s New Education Policy 2020 encourages State Governments to ensure that wherever possible students should be taught in mother tongue/regional language/local language. The idea is supported by robust research showing that children understand and learn most effectively and have more cognitive development when taught in their mother tongue or home language; the NEP also suggests that teachers may use bilingual approach to teach subjects, the Union Education Minister pointed out.

“Keeping in mind the values enshrined in the New Education Policy 2020 and preserving the best interest of Odia speaking school children in Jharkhand, I seek your personal intervention in supporting and securing Odia language education in Jharkhand State for its Odia speaking population by addressing the issues highlighted above. Needless to mention the Union Government and I remain committed to support the State Government in this endeavour and also in protecting and preserving the cultural and linguistic diversity of the country,” the letter further read.

Pradhan, in another letter to Andhra Pradesh Chief Minister YS Jagan Mohan Reddy, has sought the latter’s personal intervention for harmonious resolution of issues pertaining to the Odia language-based education in border villages of Andhra Pradesh.

To resolve this situation, both the State governments had entered into an agreement to cater to the needs of the students who wish to learn their respective languages (Telugu in Odisha and Odia in Andhra Pradesh) in schools. However, it is noted that requisite support is not being extended to the students of Vishakhapatnam and Srikakulam districts who wish to learn Odia. In Odisha support is extended to the students opting to learn Telugu as a language subject in schools including recruiting teachers for the same. A similar support to Odia minority students in Andhra Pradesh is the need of the hour, Pradhan said.

The Government of Andhra Pradesh is yet to supply text books to the Odia medium students in Class X. Schools have reopened in Andhra Pradesh, but Odia text books are yet to reach the students. Srikakulam district has many Odia students in High Schools who have not yet received Odia books for the current academic year. This will adversely affect education of the Odia-minority students in Andhra Pradesh and the cause of maintenance of linguistic diversity in the State.

There is a need for building an enabling environment to facilitate learning of the Odia speaking students. The following measures will be of help:

As responsible public representatives, it is our prime duty to safeguard interests of the minority groups and to uphold cultural and linguistic diversity in the country. The Union Government and my Ministry remain committed to the cause of a peaceful resolution of any such dispute and, personally, I shall be happy to be of help in facilitating the process of mutual settlement of the issues, the letter read.

“Therefore, keeping in mind the welfare of the minority students of Odisha Andhra border villages, I seek your personal intervention for expeditious and proactive measures for a peaceful and mutually agreeable resolution of the issues between the two States in the spirit of cooperative federalism,” The Union Minister concluded.