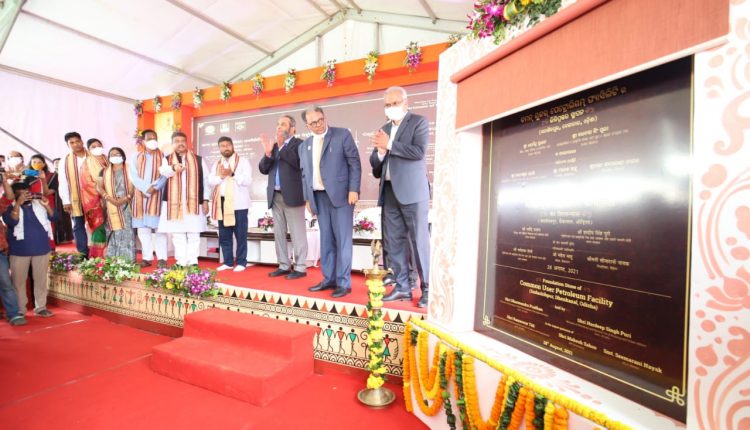 A Common User Petroleum Facility , to be utilised by all three OMCs, vij. IOC / BPC / HPC, was conceptualized at Sadashibpur in Dhenkanal district, to effectively and safely meet the demand of Central / North Odisha. Districts like Angul, Keonjhar and Dhenkanal will be majorly benefitted with the new Common User Petroleum Facility at Sadashibpur. Total 49.671 acres land has been purchased / leased through State Govt. of Odisha.

A state of art, fully automated depot having storage capacity of about 42000 KL has been planned for storing MS, HSD, Ethanol and Bio-diesel. The estimated total capital cost, including land cost of the Sadashibpur  Common User Petroleum Facility POL is Rs.394 Cr. While BPCL will be the lead company for developing this facility, the Capex will be shared amongst participating companies based on mutually agreed formula.

Sri Pradhan said, “Hon’ble Prime Minister Shri Narendra Modi vision of “Purvoday” is to ensure infrastructure development of Eastern part of India. India cannot be developed without the development of Eastern part of the country; therefore, Prime Minister Modi emphasized the need for focused development of Eastern India to fuel next wave of national growth. As a result, the Eastern States of India, in particular Odisha, has witnessed accelerated growth in the past years. He said the Common User Petroleum Facility will lead to reduce the transportation cost of petroleum materials in the regions of Central & North Odisha and it will be connected with railways line also. Keeping in mind the industries like TATa Steel, NALCO, , Jindal India Thermal Plant, NTPC , this CUPF has been conceptualised. Due to this project, Dhenkanal district will also have of other small industries and will be reason of employment generation for the local people.

In adding to this, Sri Teli thanked Oil Industries and people of Dhenkanal for their support and efforts. He emphasised on the completion of this CUF Oil Terminal project within the targeted period. He said, such more projects are in the proposal from ministry for the development of Odisha & Assam.

Under the leadership of Ministry of Petroleum & Natural Gas, several projects have come up in recent times to realise this vision of Hon’ble Prime Minister. BPCL has already completed 44 TMTPA LPG bottling Plant at Balangir which was commissioned in record time 19 months. Since commissioning plant has bottled around 25 lakh cylinders and it has been providing indirect employment to about 100 personnel per day. An Integrated 1G and 2G  Bio Ethanol Refinery in Bargarh by BPCL with the production capacity of 200 KL per day of 2G Ethanol using approximately 400 MT/day of Biomass as the feedstock, is scheduled to be completed by March 2023. City Gas Distribution (CGD) network is being developed by BPCL in 9 districts of Odisha which includes Angul and Dhenkanal. Around 61 CNG stations, 67000 PNG connections and 5000 INCH-KM pipeline laying is planned in Minimum work programme (MWP) with total investment of about Rs. 2500 Cr across 9 districts of Odisha. BPCL has done remarkable achievements in LPG penetration in the state of Odisha. LPG penetration which was at 20.05% in April 2014, has been increased to 82.26% in 2021 with 47.7 lakh connections by OMC released under Pradhan Mantri Ujjwala Yojana. Apart from the ongoing projects, BPCL has planned for upcoming projects in near future: Dhutra Common User Petroleum Facility (BPCL & HPCL). BPCL has envisaged setting up a Petroleum terminal at Jharsuguda so as to meet the ever growing demand of petroleum products in western Odisha. BPCL as a lead company along with HPCL has identified suitable land of 98 Acres.

There Have Been No Outages In Aadhaar-PAN/EPFO Linking Facility: UIDAI