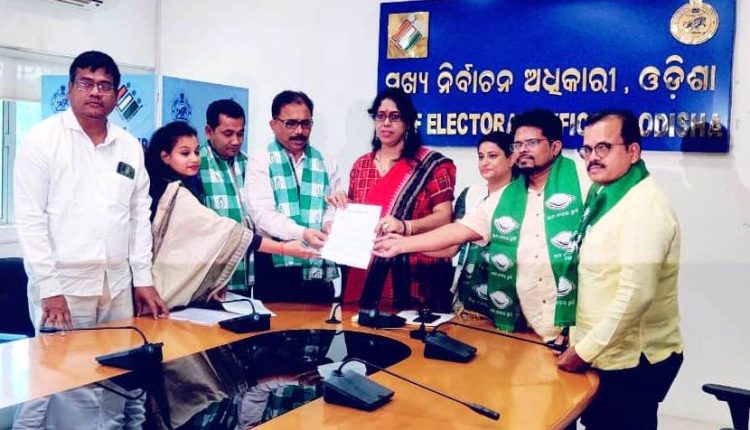 Bhubaneswar: A delegation of the ruling Biju Janata Dal (BJD) on Friday submitted a petition with the Chief Electoral Officer of Odisha against the opposition BJP leaders accusing them of harassing, threatening and maligning the image of women leaders amid campaigning for the Dhamnagar by-poll.

The BJD delegation led by party spokesperson Lenin Mohanty today submitted the complaint letter to the Odisha CEO alleging that it has become a common practice of Odisha BJP leaders to keep running to the Chief Electoral Officer and Election Commission when they realise that they are losing in elections and try to mask their fear of upcoming defeat.

“In the Dhamnagar by-poll now, we are also seeing the same pattern emerging. Further, the Odisha BJP continues to harass, threaten and malign the Nari Shakti (Women Power) and Women leadership of Odisha in this Dhamnagar by-poll campaigning,” the letter read.

“Yesterday, the Biju Janata Dal had intimated the Chief Election Commissioner and Election Commission of India about defamation and maligning of the image of Women Self Help Groups and their members by the Odisha BJP. The Odisha BJP has been circulating fake videos purportedly about these SHG women members that they have a political role in Dhamnagar by-poll, especially with a masked lady stating so in a video. This blatant maligning of the Women SHG members has pained 4.5 crore Odias across Odisha and not only in Dhamnagar,” the BJD said.

Instead of learning from its grievous behavior, the Odisha BJP continues to assault, attack, harass, threaten and malign women in Odisha. Yesterday, a senior woman Minister of Odisha and BJD senior leader Smt. Pramila Mallik was obstructed, detained, verbally assaulted and harassed in public view by the Odisha BJP leaders and workers during the Dhamnagar by-poll.

The BJD mentioned that along with the petition they have submitted the visuals of the incident in a Pen-drive as evidence.

“We demand strong and stringent action against the Odisha BJP leaders and workers who have conducted such heinous behaviour and also that appropriate Police protection should be provided to the Nari Shakti of BJD who are being threatened, harassed, and abused by the Odisha BJP leaders and workers in this Dhamnagar by-poll campaigning,” the petition further mentioned.