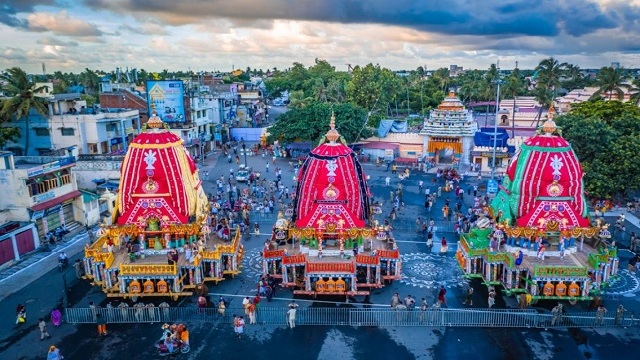 Devotees line up for Navami darshan at Gundicha temple

The Sandhya Darshan or Navami Darshan of Lord Jagannath and his siblings will be held today at the Adapa Mandap inside the Gundicha Temple in Puri.

Reportedly, the Sandhya Darshan has begun in the morning and will continue till 4 pm. The rituals of the holy deities are underway since morning and the gates of the Gundicha temple have been kept open for the devotees.

The barricade in front of the Singha Dwara of the Gundicha Temple has been expanded in view of the crowds for Sandhya Darshan. In addition, the fire department has set up water arrangements along with the sheds in view of the huge crowd and humidity.

According to the temple’s administration, special rituals of the holy deities including Senapata Lagi, Kusumi Lagi will be performed after the Sandhya Darshan today.

Preparations for Bahuda Yatra (return Car festival) of Trinity began when the three chariots were given a south turn and parked at Saradhabali in front of Nakachana Dwar or the exit gate of Gundicha temple. The Bahuda Yatra will be conducted on Friday.