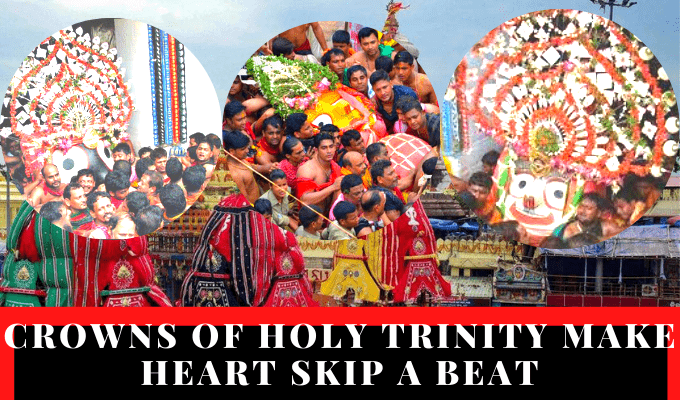 Puri: Rath Yatra, the annual sojourn of Lord Jagannath holds the most adorable significance in Odia culture and also became a common sight in most major cities of the world.

The nine-day-long festival starts from the Snana Purnima–the holy bath of Lord Jagannath and his siblings and when the three deities come out of their abode, the captivating scene of the crown or tahia of Lord Jagannath swinging and moving like waves, makes the heart of devotees skip a beat.

Lord Jagannath and his siblings Lord Balabhadra and Devi Subhadra are adorned with Tahia (specially-made headgears) for the ceremonial procession on the occasion of Rath Yatra. The captivating scene of the crown or headgears of Lord Jagannath swinging and moving like waves, makes the heart of devotees skip a beat.

Using bamboo, cane, banana stem, and other colourful elements, the framework of the gorgeous headgears are prepared first. It is adorned with leaves like scutch grass, basil, mirabilis Jalapa and various fragrant flowers just before Rath Yatra day.

Before that, the Chitrakara servitors or painters of the temple add touches of organic colours to these crowns that the deities flaunt while coming out of the temple during Pahandi (ceremonial procession).

A total of 24 ‘Tahias’ are required to put on the heads of the deities during all their festivals. Altogether eight headgears are required for the decoration of Srimandir Trinity and Lord Sudarshan during the Snana Purnima ritual.

Servitors also put four Tahia on the deities during the Pahandi procession at Srimandir on the occasion of Rath Yatra. They also decorate the deities with four Tahia while carrying them from the chariots to the Srigundicha temple.

During the Pahandi on Rath Yatra when the three sibling deities come out of their abode, no matter how far a devotee is standing on the Grand Road, the moving tahia indicates the Lord’s motion.