Deogarh: Deogarh district, once famous for child marriages, has successfully managed to end the scourge in 370 of its villages with sustained surveillance and awareness drives. The district now has the maximum number of villages that have dumped the practice of child marriage.

According to a recent survey, the state of Odisha has a child marriage rate of 21.3% as compared to Deogarh alone is 23.6%.

In the past few years, various public awareness programs have been organised by the Deogarh administration to address such an evil and illegal act — child marriage. At least 39 child marriages in 2019 and 42 marriages in the year 2020 were foiled with the help of district police, Childline protection and Childline officials.

In its bid to make Odisha child-marriage free by 2030, the State government has asked all the Collectors of 30 districts to keep a strict vigil on such practices and take preventive measures.

Under the direction of which, Collector Sudhansu Mohan Samal formed a task force. A 30-day “No Child Marriage” campaign was launched by the administration to raise awareness in every village in the district.

Subsequently, to make the campaign successful, meetings were held at many villages, and a report was submitted with the approval of the Sarpanches.

Chairman of the Block Task Force and Group Development Officer, Divya Shankar Jaipuriya, Tunu Meher and Krishna Chandra Dalpati reviewed the demands stated by the sarpanches and sent for approval of the district administration.

So far, a total of 120 villages including Thianal village in Deogarh have been declared child-marriage free in the state. 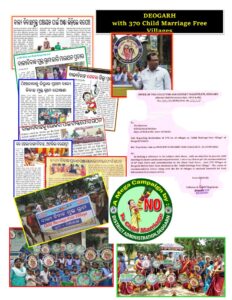 In the coming days, various awareness programs will be organised to make the remaining villages free from child marriage practice and make Deogarh a district free of child marriage, said offical sources.