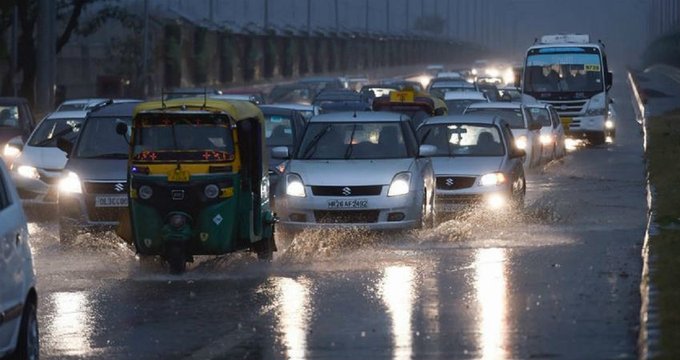 Delhi: The national capital, Delhi, received a spell of rainfall on Saturday and Sunday morning, leading to water-logging in many areas. An average of 25.1 mm rainfall has been recorded in the past 24 hours.

The India Meteorological Department in its latest bulletin on Friday predicted that isolated pockets of Uttar Pradesh and Rajasthan will experience cold wave to severe cold wave conditions within the next 24 hours, while parts of Delhi, Haryana, Chandigarh could receive rainfall in the course of the next 48-72 hours.

The India Meteorological Department (IMD) had predicted that North India may get some relief from Sunday (January 3) as temperatures are expected to rise by 3°-5° Celsius.

The IMD had predicted thunderstorms and light to moderate rainfall over parts of Delhi, including South Delhi areas like Ayanagar, Dera Mandi, Tughlakabad for today. The IMD has predicted a hailstorm on Monday, when the intensity of the current western disturbance would be the highest.

According to the IMD, cold wave to severe cold wave conditions were to abate over many parts of the plains of northwest India and adjoining central India.

Dense to very dense fog seen over Delhi, Uttar Pradesh, Haryana, Punjab, Chandigarh on Saturday and Sunday morning are likely to abate from Monday, it said.

Rupee Should Stabilise Once US Reduces Speed Of Its Rate…