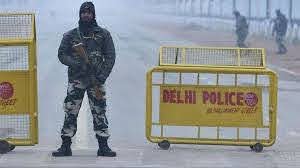 New Delhi: The Special Cell of Delhi Police on Monday arrested five suspected terrorists from the city’s Shakarpur area after an encounter.

According to the information available, they have been arrested under charges of narcoterrorism.

Of the five people, two are from Punjab, three are from Kashmir.

They are also said to have linkage with big terror outfits including Khalistan.

The development comes at a time when Delhi is already disturbed by the ongoing protests as it emerged as the epicentre of the agitation.