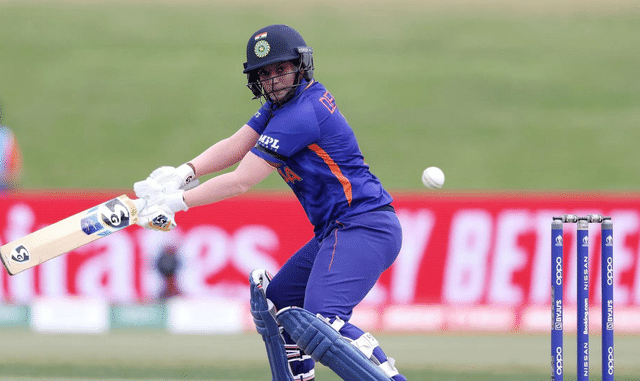 India all-rounder Deepti Sharma first produced a brilliant bowling display before guiding India to victory with the bat against Sri Lanka in the first ODI in Pallekele.

Sri Lanka won the toss and opted to bat in the first ODI in Pallekele. It was a beginning of a new era for India – one without the great Mithali Raj in the team – with Harmanpreet Kaur beginning her innings as India’s full-time ODI captain.

Renuka Singh was welcomed into the attack by Hasini Perera but the Indian pacer came back strongly in the next over, removing the dangerous Chamari Athapaththu in the third over of the innings.

The introduction of spin early worked immediately as Hansima Karunaratne, trying to get off the mark with a big one, charged Deepti Sharma and was out caught at mid-off for an 11-ball duck.

Despite losing two wickets inside the Powerplay, Sri Lanka maintained a decent scoring rate, thanks to Perera. Her patient 34-run stand with Harshitha Madavi settled the early jitters before Deepti worked her magic again and trapped Perera in front of the stumps for 37.

Skipper Harmanpreet struck in the next over to send Kavisha Dilhari packing. Sri Lanka were soon in a whole lot of trouble when they lost their set batter Madavi and had half the side back in the hut for 84.

Sri Lanka were in danger of being bowled out before a fighting innings of 43 from Nilakshi de Silva bailed them out of trouble. Anushka Sanjeewani and Inoka Ranaweera made valuable double-digit contributions to take Sri Lanka’s total to 171.

Renuka Singh and Deepti Sharma were the pick of the bowlers with three wickets each and were well supported by the rest of the pack.

Like Sri Lanka, India too lost two wickets inside the Powerplay – Oshadi Ranasinghe scalped Smriti Mandhana and Yastika Bhatia in consecutive overs to put some early pressure on India.

Captain Harmanpreet Kaur walked out on the fall of the second wicket and together with Shafali Verma ensured Sri Lanka didn’t inflict any more damage in the first 10 overs.

The partnership was starting to look dangerous when Shafali was out stumped trying to charge Inoka Ranaweera.

Playing her first ODI since 2019, there would have been some butterflies when Harleen Deol walked out to bat in a precarious position. Deol, though, put the pressure right back on Sri Lanka by hammering two boundaries in quick succession.

Harmanpreet too got in on the act but Ranaweera struck again to send the skipper back six runs short of a fifty. The slow left-arm orthodox picked up two more wickets in the next two overs, including that of Deol.

Still 34 runs away from a win, a wicket or two could have put massive pressure on India. But Deepti and Pooja Vastakar batted sensibly to take India close to victory before the former finished the game off with two sixes to take a 1-0 lead in the series.