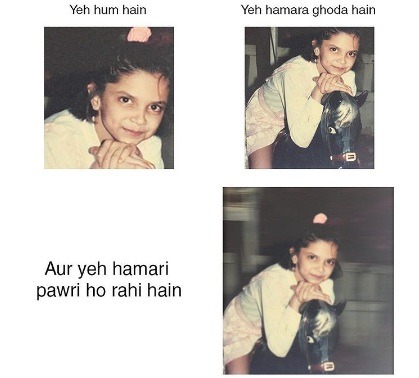 Mumbai: After actor Shahid Kapoor, Deepika Padukone is the latest celebrity to take part in the ‘Pawri Hori Hai’ trend.

Deepika shared a collage of one of childhood pictures and wrote: “Who made this?” The picture showed a collage of three pictures – the first one is a closeup of her, with text that read, “yeh hum hain”, the second one shows the same picture, zoomed out, with her on a wooden horse. It read “yeh hamara ghoda hain” and third picture’s text says “aur hamari pawri ho rahi hain”.

The “Pawri Ho Rahi Hai” trend took off last week when Pakistani influencer Dananeer Mobeen shared a funny video on social media. Her hilarious video – and especially her pronunciation of the word “party” as “pawri” – exploded on the Internet and was turned into a viral hashtag that has been trending for days now.

Many celebrities including Bollywood stars are coming with some super fun videos and pictures on social media. Fans are also creating videos and sharing hilarious memes on the social media platforms.

The dialogue gained immense popularity after musician Yashraj Mukhate turned it into a rap song.

Two Held For Biting Off Ear Of Bank Employee In Sambalpur