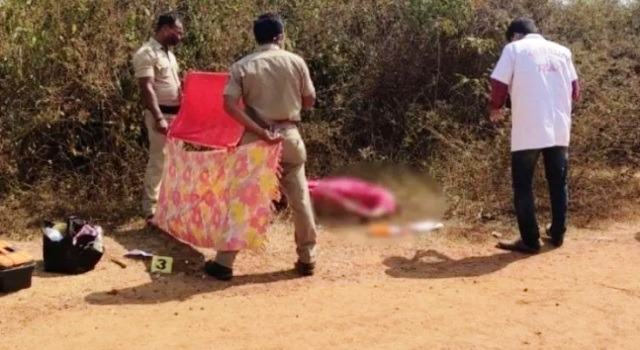 Bhubaneswar: The woman, whose decapitated body was recovered on Bhubaneswar outskirts two days ago, was strangulated to death before being beheaded. This was revealed from the post-mortem report, sources said.

According to sources, having knowledge of the autopsy report, the woman had died due to strangulation before her head was severed from the body. However, the police claimed that they are yet to receive the autopsy report as the body had been sent to the AIIMS, Bhubaneswar for re-post-mortem.

In the meanwhile, the Commissionerate Police have released posters of the body detailing the physical attributes of the victim while appealing people to call on a helpline (8280338323, 8280338296) in order to help establish her identity. The cops have also released a photograph of the deceased woman with a tattoo on her hand for identification.

This apart, the CP also announced a cash prize of Rs 50,000 for identifying the deceased woman.

The decapitated body of the woman was found dumped on the Andharua-Daspur road on Thursday. Police had initially suspected that the woman was murdered and then beheaded in order to destroy her identity.

Police have launched an investigation after registering a case under IPC Sections 302 (murder) and 201 (causing disappearance of evidence of offence).