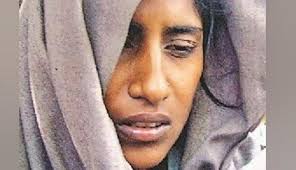 Lucknow: Shabnam, who was awarded the death sentence for killing seven members of her family in April 2008, has filed her second mercy petition with Governor of Uttar Pradesh Anandiben Patel and President of India Ramnath Kovind.

The development takes place at a time when Mathura Jail – the only jail in the country where women can be hanged to death – is reportedly preparing to execute Shabnam in what will be the first hanging of a female convict in 70 years.

According to Anand Kumar, Director General (prison department and reform services), Shabnam had also approached the Uttar Pradesh Governor earlier for pardon, but Patel had rejected her petition.

“A copy of mercy appeal to the UP governor by death-row convict prisoner Shabnam through her lawyer regarding Supreme Court order dated May 25, 2015, was made available to our office to be forwarded,” said Rampur jail superintendent.

Sources said that two lawyers had met Shabnam in Rampur jail on Friday and convinced her to send a mercy petition to the Governor of Uttar Pradesh.

Shabnam, who is currently lodged at District Jail, Mathura, was found guilty of murdering seven of her family members including a 10-month-old infant in 2008 after her lover Saleem was not accepted by her family.

As per the case of the prosecution, the family members were murdered in their sleep by Saleem after Shabnam administered diazepam tablets (sedatives) to the entire family.

Shabnam and her lover Saleem were convicted and sentenced to death by a Sessions Court in Amroha back in July 2010.