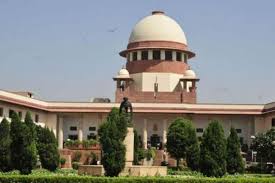 New Delhi: The Supreme Court has asked Union government to file an affidavit detailing measures to deal with stubble burning situation in NCR during winters.

A bench comprising Chief Justice S A Bobde and Justices A S Bopanna and V Ramasubramanian gave the direction after it was submitted that the pollution caused due to stubble burning.

The top court was hearing a petition which has raised the issue of pollution caused due to stubble burning in neighbouring states of Delhi.

Senior advocate Vikas Singh told the bench that the issue will arise again. The issue of stubble burning is over and it will start again next time, he said. The bench asked solicitor general to file an affidavit on the issue.

On November 6, the apex court had asked the Centre to ensure there is no smog in Delhi as it was informed that the Commission has started functioning from that day. It said that pollution problem has to be dealt with by the executive as it has the power, money and resources for this.