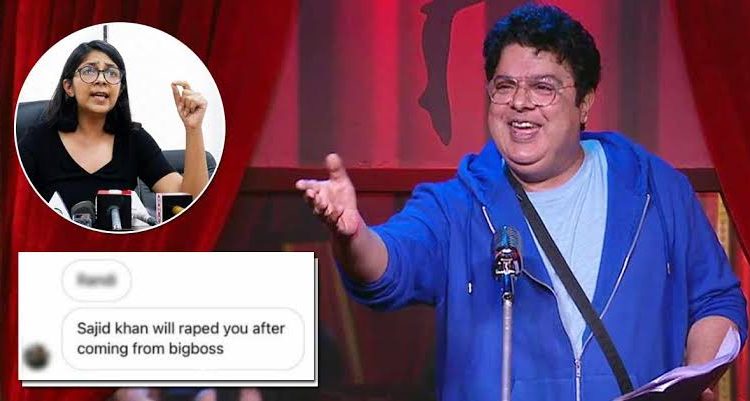 New Delhi: Delhi Commission for Women (DCW) chief Swati Maliwal on Wednesday said she has been receiving rape threats on social media after she wrote to Union Information and Broadcasting Minister Anurag Thakur to remove filmmaker Sajid Khan out of Bigg Boss over allegations of sexual harassment against him.

She also asked Delhi Police to arrest the people who allegedly gave her rape threats.

“Ever since I wrote a letter to the I&B minister to get #SajidKhan out of Bigg Boss, I have been receiving rape threats on Instagram. Obviously, they want to stop our work. I am giving a complaint to Delhi Police. Register FIR and investigate. Arrest those who are behind them,” she tweeted.

Earlier on Monday the DCW chief took to her Twitter account and said that the numerous complaints against Sajid Khan show his ‘disgusting mentality.

“Ten women had accused Sajid Khan of sexual harassment during the #MeToo movement. All these complaints show the disgusting mentality of Sajid. Now, this man has been given a place in Bigg Boss, which is wrong. I have written to @ianuragthakur to have Sajid Khan removed from this show,” she tweeted.

Filmmaker Sajid Khan’s participation in the new season of Bigg Boss 16 started on October 1 has led to a lot of anger among people.